I’ve grouped the cuisines of Bahrain, Iraq, Kuwait, Oman, Qatar, Saudi Arabia, United Arab Emirates and Yemen together into the region of the Arabian Peninsula. This area has some of the oldest recipes in the world, as the region between the Tigris and Euphrates rivers, Mesopotamia (literally meaning “between two rivers”), is thought to be the cradle for the development of cuneiform by the Sumerians as far back as 4 BC, which is one of the first known writing systems, using a stylus and wet clay. Some of the surviving clay tablets from these times have recipes and, delightfully, shopping lists. It would appear the phenomenon of immediately forgetting what you need as soon as you enter the grocery store is not necessarily modern! Sadly, in more recent times, much of the Arabian Peninsula has been ravaged by war, in part due to its wealth of the globally dwindling resources of oil and natural gas. The peninsula is marked by wide stretches of deserts, broken by few but large rivers that swell and dwindle dramatically with the seasons, as well as mountain ranges along some of the borders, and marshy coastland abutting the Red Sea and Persian Gulf. As such, there are relatively few fertile valleys dotting the region, which are crucial for growing crops and grazing livestock to feed the populace. Much of the cuisine of the Arabian Peninsula is therefore based on grains (wheat, rice and barley), meat (although not pork due to Islamic dietary laws) and dairy, with select well-suited fruits and vegetables often taking centre stage, such as dates. 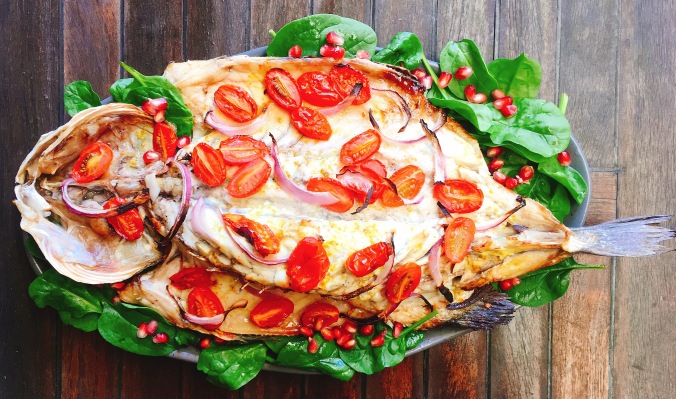 Masgouf is commonly considered the national dish of Iraq, consisting of grilled carp. Being a freshwater fish, carp is commonly found in the Tigris and Euphrates river systems that snake around Iraq. The whole fish is first butterflied by cutting along the belly and flattening to an even thin circular piece. The raw fish is then seasoned with oil, salt, tamarind and turmeric, and grilled over fire, often clamped between specialised cast iron holders, for a couple of hours until the fat has rendered off and the outside is crispy. I couldn’t source any carp, so settled for barramundi, which is in abundant supply where I live in Brisbane, and is at least considered a river fish, and therefore the closest thing to carp I could manage (although apparently not as fatty, and therefore requiring less grilling time). Carp, because of their incredible hardiness and adaptability, are a terrible pest in Australia, and have contributed significantly to the degradation of the natural ecosystems in many rivers. I am probably naïve in supposing that it could be helpful if Australians developed more of a taste for carp, so that fishing industries could get them out of rivers and onto plates in preference to other native fish? A job for the delicious masgouf, perhaps. I finished off my butterflied and grilled carp-imposter with a squeeze of lemon, as well as some grilled tomatoes and onions, placed on the fish at the end, and served it on a bed of spinach and pomegranates.  Iraqis adore masgouf, particularly from the capital Baghdad, which is renowned for the best masgouf in the country. Saddam Hussein’s favourite dish was masgouf, and this knowledge apparently led the US task force to his bunker, after staking out the fish pond of a known associate, then tracking a bodyguard who came to collect fresh carp with which to prepare the masgouf. Were I hiding from US military forces, I suspect my weakness for food variety would also be my downfall – here’s hoping we never find out. Masgouf can be traced as far back as the 10th century to the earliest known Arabic cookbook Kitab Al-Tabih (The Book of Dishes). Within the book, masgouf is described as looking “like the sun, a radiant delight, redolent with aloe wood, musk and amber”. I think in over 100,000 words of talking about food, I have never come close to the beautiful imagery that the long gone author Ibn Sayyar al-Warraq achieved with that short phrase. It’s comforting to know that, however much we think we are revolutionary innovators, there will always be much more to learn and appreciate from the annals of history. 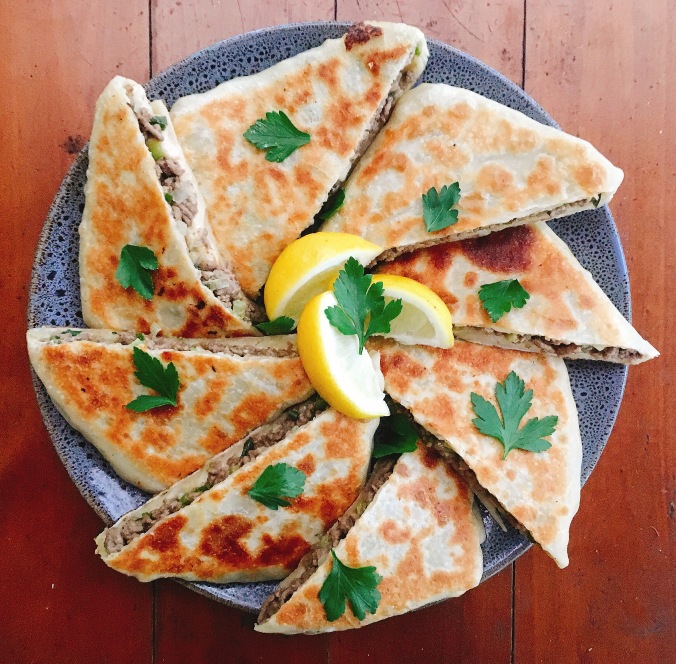 I have come across recipes for mutabbaq (or murtabak) in various forms and spellings for many different regions of the world, including a few countries in the Arabian Peninsula, as well as countries in South East Asia, such as Malaysia, Indonesia, Singapore and Thailand. The name means “folded” in Arabic, and seemingly predominantly for this reason, it is commonly cited as having originated in Yemen, which has a large Indian population that is thought to have invented the meal with inspiration from Indian breads such as roti. There is also debate, however, that the dish was invented in India itself, and takes its name from an amalgamation of “muta” (meaning egg) and “bar” (an abbreviation for bread). Regardless, mutabbaq is now famous as a beloved street food and/or breakfast in myriad parts of the world, and Yemen seemed as likely a place for me to attribute its origin as anywhere else. The dish consists of a dough of flour, water, egg, salt and oil, rolled very thinly, and then wrapped around a filling, in my case consisting of precooked ground beef, spring onions, leeks, garlic and spices such as cumin, chilli powder, salt and pepper, mixed together with plenty of egg. Once a flat square package is formed, it is then fried in oil to produce a lovely crispy and golden brown exterior encasing the juicy filling of egg and meat. I served my mutabbaq with a squeeze of lemon and some parsley, and relished finally tasting the elusive and promiscuous dish. 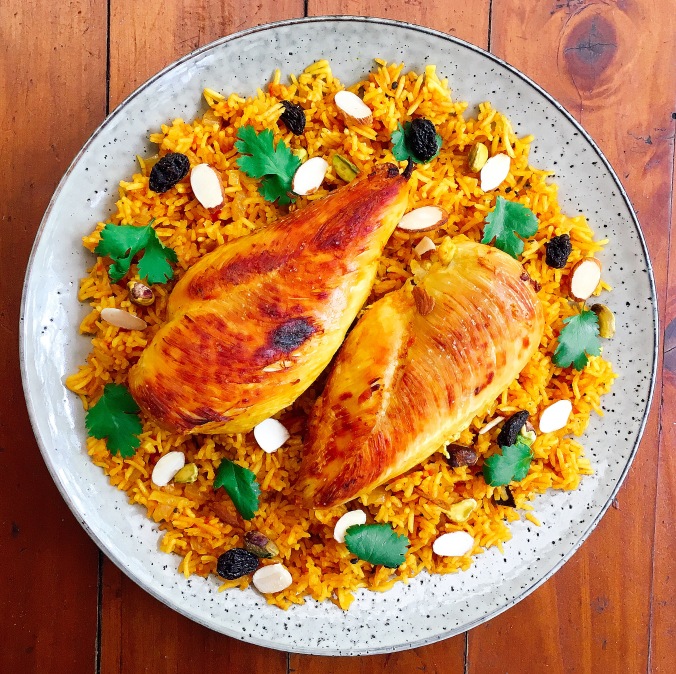 I’ve grouped kabsa and machboos together because I haven’t been able to work out how  or if they differ, and honestly I’m not sure exactly which one I made. Indeed, my very basic understanding is that the dishes vary so much between cooks that a single recipe could feasibly describe both or neither. Machboos is commonly listed as the national dish of Bahrain, Kuwait and Qatar, while Kabsa is more likely to be cited as the national dish of both Saudi Arabia and Yemen. Well, regardless, it’s clear that, whatever the name, a dish of heavily spiced meat and rice is adored unanimously by almost the entire Arabian Peninsula. I made my version with chicken, tomato, onion, garlic, chillies and a huge variety of spices including turmeric, cinnamon, cardamom, nutmeg, ground coriander, star anise, pepper, cloves, saffron, bay leaves and dried limes (loomi). I used basmati rice, as is traditional, and near the end of the cooking process added slivered almonds, raisins, fresh coriander and pistachios. I finished cooking the chicken by grilling it in the oven, akin to a Yemeni process called “mandi”, which describes cooking meat over charcoal in a covered hole in the ground. To finish off the dish, I sprinkled it with rose water just before serving, which is a fantastic accompaniment to the cardamom, giving the dish a heady sweet and aromatic accent. 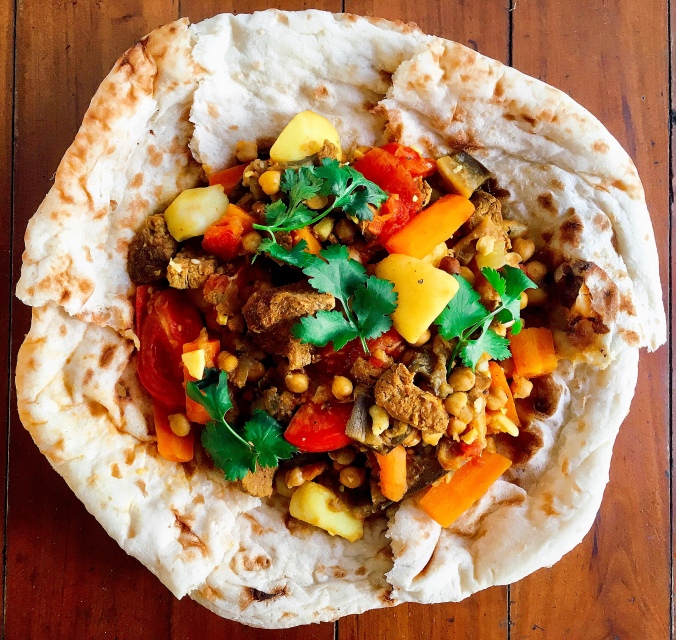 Tharid is a dish of meat and vegetable stew/broth, usually served on top of or combined with pieces of flatbread. It is popular across the Arabian Peninsula, possibly because it is widely regarded as the favourite meal of the Prophet Muhammad, and therefore indisputably excellent. This idea came about because the dish is mentioned in many hadith, which are recognised recordings of the words, actions and thoughts of the Prophet Muhammad, second only to the Qur’an in Islamic religious authority. Perhaps for these reasons, or because its heartiness makes fasting during the daylight hours more manageable, tharid is especially popular during the holy month of Ramadan. Then again, the resourceful ethos behind using up old stale bread, excess vegetables and tough cuts of meat in this meal are also considered to represent the principles driving the self-restraint, practicality and sensibility of Ramadan and Mohammad’s teachings, so perhaps this is an additional reason for its popularity. To make my tharid, I first browned pieces of lamb, then sautéed onion, garlic, chillies and spices such as cinnamon, cloves, cumin, coriander seeds, pepper, cardamom and turmeric. I then added diced tomatoes and pieces of carrot, potato and eggplant and covered the mixture with water. After a few hours, when the lamb was fall-apart tender, I added some chickpeas to the stew, by which time it was thick and savoury. Tharid is not complete without flatbread, which can be immersed within the soup, or can serve as a plate underneath it. I knew I would love tharid before making it, as it’s very difficult to misstep with the combination of slow-cooked lamb, vegetables, and bread. I might not quite describe it as a religious experience however – I’ll leave that to the experts.