Like most Latin American countries, Argentina and Uruguay’s cuisines have been shaped by the confluence of native traditions and ingredients, as well as influences from immigrants coming from all over the world, particularly the Mediterranean. Both of their cuisines are strongly shaped by enormous quantities of beef coming the sweeping pampas (grassy plains), and have very few indigenous influences as compared to other South American countries. In the case of Argentina, the most striking external influence is Italian, and consequently a quick look at any Argentinian restaurant’s menu will yield an abundance of pizza and pasta. Even the Argentinian speech sounds a bit like Spanish spoken with an Italian accent. I’ve visited the capitals of both Argentina, Buenos Aires, and Uruguay, Montevideo, very briefly, and was surprised by how very European they both were. The temperate weather, classic European architecture, modern conservative dress sense, and tall, white citizens could have easily been plucked from the streets of Milan, Berlin or Paris. Certainly, they don’t embody the bright, noisy, colourful and chaotic stereotype of Southern America that might spring to mind if you have never visited. On the first day in both cities, we ordered a parrillada (a mixed grill barbecue with salad, sauces and chips brought still flaming to the table), and it was obviously wonderful and delicious – just the thing to recover from a 20 hour international flight. However, I subsequently found the lack of diversity a bit tiring – once I got sick of enormous slabs of meat, pasta and pizza, there wasn’t much else to try! Also in most places, when you order a steak, that’s what they bring you. Steak. Alone. On a plate. I think the Argentinians and Uruguayans could learn a thing or two from their many northern neighbours, who wouldn’t dream of presenting a cut of meat without several different accompaniments. After all, I hold the firm belief that accompaniments are almost always the best part of the meal, so their neglect is tantamount to heresy in my book. While in Uruguay, I also came across the unusual government regulation that forbids restaurants from leaving salt on the table, nor offering it to patrons unprompted. As an ignorant tourist, therefore, you will inevitably enter into a strange conversation with waiters endlessly asking “would you like anything else? Are you sure? No seasoning perhaps?”. The way that one restaurant I visited In Uruguay unfortunately subverted this regulation was by wildly oversalting their meat before it left the kitchen to near-inedible levels. As a self-confessed saltaholic, my opinion of a meal as too salty is quite the statement! However, quirks aside, the barbecue/meat tradition in this part of the world is undeniably wonderful, as are the many other regional and/or fusion-influenced specialities, so I admit that my first impressions may have been driven by my poor choice of tourist-catering restaurants, as well as my complete ignorance of all other parts of these countries outside of their capitals. A convincing reason to go back, no? Argentina and Uruguay have also more than made up for that experience by providing me with my daily addiction of the last few years: mate. Mate (pronounced mah-teh) is a strongly caffeinated tea made from the yerba mate plant, traditionally drunk from a hollowed out gourd through a hollow metal straw that filters the tea leaves. Having never warmed to coffee, I make a large cup of this tea every morning and refill it with hot water throughout the day, regularly feeling thankful to the clever South American inventors of this preparation for getting me through every day. 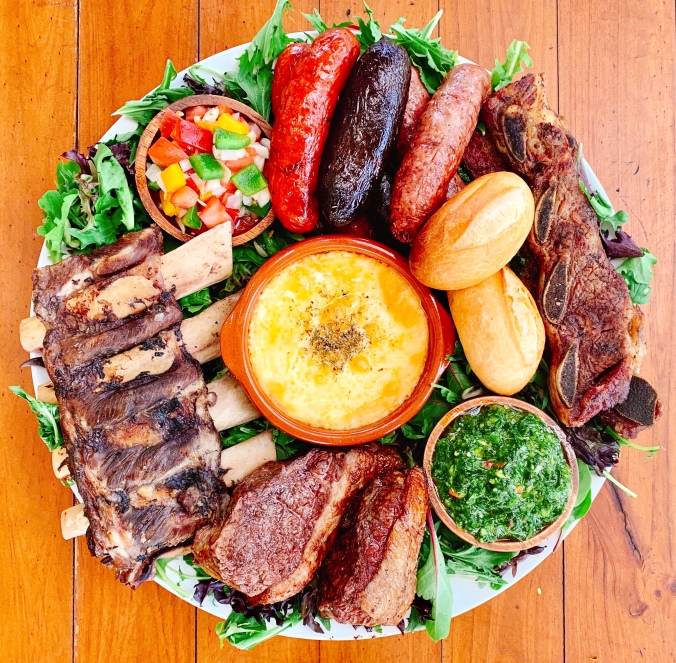 Asado or parrillada is the technique or event of having a barbecue, usually cooked on an outdoor grill over flame or hot coals, hugely popular in both Argentina and Uruguay. The event is generally not very welcoming to vegetarians and vegans, with the major focus centering around meat, particularly cuts of beef, offal and embutidos (types of sausages), usually simply prepared without a marinade, just some salt. I included a whole-barbecued sirloin strip, beef ribs (whole and “flanken style” cross cut), chorizo sausage, morcilla (blood sausage), and pork sausage in my asado. This would traditionally be joined by a few token barbecued vegetables (although I included quite a lot for some vegetarian guests), barbecued provolone cheese (provoleta), salads, bread, and plentiful red wine. The sauces I prepared were chimichurri, made with garlic, oil, vinegar, and finely food processed herbs such as parsley and coriander, and salsa criolla, which is a chunky mix of tomatoes, onion and capsicum. The history of beef in these countries is a long one, and can be attributed to these countries’ current statuses as first- and second-highest consumers of beef in the world. It begins with the legend of Juan de Salazar y Espinoza and the Goes brothers in 1556, who first introduced cattle into the “pampa” (Argentinian grazing plains), which they sourced from Brazil in the form of one bull and seven cows. Those cows then reproduced prolifically and produced a huge population of wild cows inhabiting the flat grassy expanses of Argentina. This prompted the tradition of “gauchos” (cowboys), who made a living by herding/hunting these wild cows, predominantly to skin and sell the leather, which was a hugely profitable venture of the time. However, this lifestyle inevitably led to a heavily meat-based diet of the gauchos, cooked in a rustic, outdoor manner. And so, the asado was born! By the 18th century, there was an estimated 40 million wild cows in Argentina. By the 19th century, Charles Darwin himself spent a whole year sleeping under the stars in Argentina following this lifestyle, and found it so agreeable that he wrote a letter to his sister pronouncing himself a gaucho, adoring the fresh air, meat and mate dearly. The original asados involved making a large bonfire in the ground, then propping up stakes around it, on which various whole animals (such as goat) or cuts of meat were crucified/threaded and slow cooked by the radiant heat. This tradition is still upheld in some parts of Argentina and Uruguay, and one of the most famous Argentinian chefs, Francis Mallman, is legendary for cooking in this style. After spending much of his life being classically trained in the subtle delicacies of French culinary arts, Mallman now lives on an island in the far south of Argentina, in Patagonia, where he has returned to his Argentinian roots of extremely rustic, outdoor gaucho-style open fire cooking. Prospective disciples of his practice, which is nearing a cult-like status, often come to stay with him to learn the ways of the fire.

Locro is a dense and hearty stew that originates from the Andes mountain range, where the snowy peaks and bleak winds call for piping hot stodgy meals (I know from experience!). Locro is therefore eaten in most countries that the Andes pass through, including Argentina, Chile, Bolivia, Peru and Ecuador. However, it is perhaps most famous, and has become a national dish, in Argentina. Like most traditionally home-cooked meals, the recipe is flexible, but almost always involves stewing together dried large corn kernels, meat (could be beef, chorizo, ham etc., I used the latter two), onion, pumpkin, potato, and sometimes fresh corn kernels, when they can be sourced. The mixture is simmered with water for hours until the root vegetables have formed a thick mush and all the flavours have wonderfully combined into the taste of pure cosiness. This list of predominantly indigenous ingredients makes it likely that locro originated from the people of the Incan empire, and indeed it’s called “ruqru” in the native Quechua language. These days, locro is most commonly associated with May 25 in Argentina, which is the anniversary of the May Revolution against the Spaniards, and is usually marked by citizens chowing down on a big bowl of locro to symbolise their native ingredients and traditions. However, I suspect that this tradition is also triggered by the first whispers of winter blowing into the country, as the dish is thought to be rich in vitamins and nutrients, perfect to ward off illnesses. Locro was also served at the “wedding of the century” in 2001 between the only Chilean Miss Universe winner (1987), Cecilia Bolocco, and former long-standing president of Argentina Carlos Menem. These two figures were the equivalent of royalty in their respective countries, so their union was quite the spectacular event, inviting over 6000 guests to a sport stadium. Locro was an efficient way to feed all of these attendees, perhaps symbolising the Andes that both divide and unite the two countries.

The word “matambre” can actually refer to a wide thin cut of beef, like a flank steak, taken from on top of the ribs. However, this cut is almost never grilled by itself, and one of the most popular recipes using it is “matambre arollado” (rolled matambre) or “matambre relleno” (filled matambre), which have come to be shortened to just “matambre”, referring to the entire preparation. This is convenient, because matambre is a portmanteau word of the Spanish “matar” (to kill) and “hambre” (hunger), and this meal is definitely a hunger killer! To prepare the dish, a large cut of flank steak is flattened out into a large thin sheet, and then hard-boiled eggs, vegetables (such as olives, carrot, spinach and capsicum) and herbs are laid out in rows across the surface. The steak is then rolled up, secured with string, and barbecued or baked until cooked. Thin slices are cut from the matambre, each revealing a beautiful pinwheel of meat peppered with the colourful filling. This preparation was easier than I expected, and turned out prettier than I imagined, so I highly recommend it for bringing along to a barbecue or preparing as an unusual roast dinner. It could also be a good way of sneaking some extra vegetables into kids/adults/yourself in a delicious way?

Chivito is widely considered to be the national dish of Uruguay, and, at the risk of sounding ineloquent, it can be best described as a super awesome sandwich. It starts with white bread or buns, filled with mayonnaise, tomatoes, olives, lettuce, cheese, pancetta or ham and a fried egg, finally topped with a succulent piece of grilled beef steak. This last ingredient is called churrasco, a succulent piece of thinly grilled steak. Like all great sandwiches, chivito is flexible, and other potential ingredients therefore include salad items such as cucumber, beetroot, or red capsicum. The word “chivito” is a diminutive of the word for goat “chivo”, referring to a young goat/kid. Young goats are commonly barbecued in neighbouring Argentina and legend has it that the name for the sandwich was born when an Argentinian woman requested some in a Uruguayan restaurant on the final day of 1944. The famous chef, Antonio Carbonaro, lacking goat meat, gave her a steak sandwich instead, and so chivito was born! The sandwich is undeniably delicious, and often commented on as greater than the sum of its parts. So beloved is this dish in Uruguay that there has been speculation that infamous Uruguayan football star, Luis Suárez, bit the ear of the opposing team player because he was having withdrawals from chivito while staying in Brazil for the 2014 World Cup. Nobody could argue that chivito is truly a sandwich you can sink your teeth into!