Polish cuisine originated around locally-sourced domesticated and wild meat and game (including bears!) as well as fruits, vegetables, honey and fungi that could be collected from the forests. Most of the agriculture was traditionally based around cereals such as millet, rye and wheat. Alcohol has been an important part of the daily diet, with vodka said to have originated in Poland, and a legend that Polish knights requested to be excused from the crusades because it was rumoured that there was no mead in the holy land – without which they would surely perish. Over the centuries, influences from many other European countries have fallen in and out of fashion in Poland, including via an Italian-born queen who insisted only Italian food be cooked in her court in the 1500s. The communist occupation of Poland after World War II saw a decline in the availability of myriad ingredients, and potato replaced many former staples of the cuisine, such as cereals and breads. However, I was delighted to hear that in the last few decades, the Polish food scene has been dramatically recovering, with a lot of efforts made by the locals to reclaim their old traditions, as well as a marked decline in the popularity of American fast food chains. Indeed, with “fast food” like zapiekanka (baguette stuffed with local cheeses, mushrooms, vegetables and tomato), I would probably boycott the American chains forever! 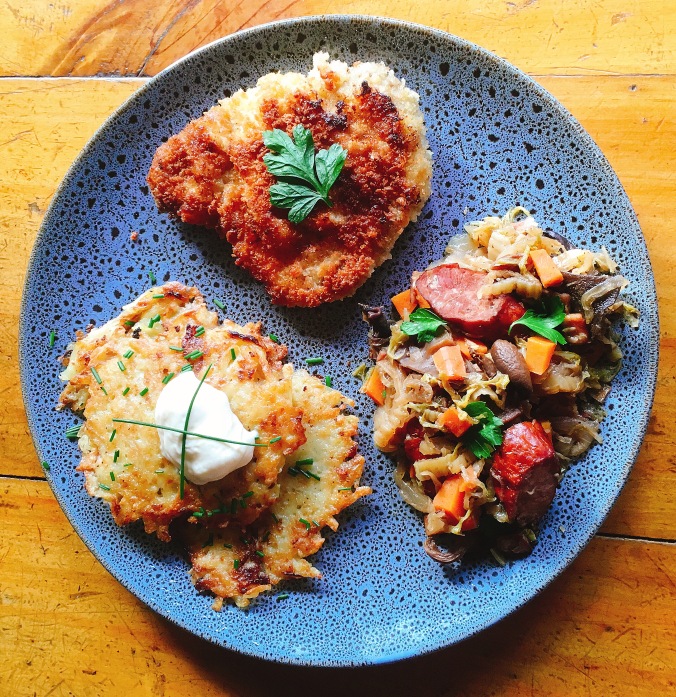 Kotlet schabowy is a pork cutlet, flattened, floured, egged, breaded, then fried until golden and crispy. It seems to have arisen during the 19th century, and its popularity grew along with the wider availability of meat. Placki ziemniaczane are potato pancakes, made by grating raw potato and onion, then combining the mixture with spices, plain flour and egg. During the 17th century, this meal was a staple food in monasteries, with the strict caveat that they could only be served with the sparse toppings of salt and pepper. Later on, placki ziemniaczane were used to replace bread in times of economic hardships for the peasant class of Poland. These pancakes form the basis of games during Polish festivals (such as “throw the bad pancake”), as well as competitions to make the largest version possible, with the current record standing at two meters across. The garnishes nowadays are fortunately a little more relaxed than those in the 17th century monastery, including meat sauce, goulash, mushroom sauce, grated cheese or apple sauce. I used sour cream, preferring to keep it a relatively simple accompaniment to other dishes. Bigos is also known as hunter’s stew, and describes a mix of meat (for instance pork, beef, poultry, game or sausage), sauerkraut, fresh cabbage, wild mushrooms and vegetables (such as carrot and onions). Other flavours added often include bay leaves, pepper, allspice, and a sweet element such as honey, raisins or prunes. The origins of this dish may lie in a medieval meal, whose Latin name “compositum” meant “mixture” and consisted of a baked or braised dish of vegetables. As you might expect from the title “hunter’s stew”, the recipe is very flexible, and there is said to be as many versions as there are cooks in Poland. It can therefore use any meat that is the catch of the day, and is often prepared and eaten outdoors, or by travellers making use of its property of not spoiling too quickly.

Pierogi are possibly the most internationally-recognised and beloved Polish dish. They are large ravioli-like dumplings, with wheat-based wrappings encasing meat, vegetable, cheese or sweet fillings. They are also popular in surrounding Eastern European countries under local names, but possibly most synonymous with Poland. Pierogi can have different shapes and fillings, with characteristic varieties of each being made for significant holidays and occasions. While the love for this food is indisputable (it is estimated that 30,000 pierogi are consumed daily at the annual pierogi festival), its origins are less clear. Before the 17th century they were considered a peasant food (lucky peasants!), but afterwards pierogi were a staple food for all of Poland. Some speculate that they were influenced by Chinese dumplings, via Italy and Marco Polo. Others say that the Russian Tatars first brought pierogi to Poland in the 13th century. Then again, perhaps they were brought by Saint Hyacinth from Kiev, who performed a miracle of regrowing storm-ravaged crops, and received pierogi in return from the grateful townsfolk. This latter story has promoted Saint Hyacinth to the esteemed position of the patron saint of pierogis, and spawned a Polish expression that translates to “Saint Hyacinth and his pierogi!”, which is used to express extreme surprise. Whatever the real story, it is thought that the word “pierogi” has origins in the proto-Slavic word for “feast”, so it’s safe to assume that they have always been delicious enough to necessitate the consumption of more than one. The dough is made with plain wheat flour, water, and sometimes egg, then cut into shapes and wrapped around a filling. My semi-circle shaped pierogi had two types of filling: potato and cheese, as well as pork and beef. They are usually cooked by boiling in salted water or stock, and then sometimes fried afterwards, which gives them a lovely golden colour and firmer texture. Pierogi can be served alone, or with a dab of butter, sour cream, fried onion, bacon, mushrooms or chives. I always preferred my Italian ravioli with minimal sauce, as I think any more than that confuses the flavours, so I am fully on board with this serving style. I loved these pierogis perhaps more than ravioli or indeed Chinese dumplings, so I definitely agree with the hype around them. Maybe the hipsters have got things worked out after all? 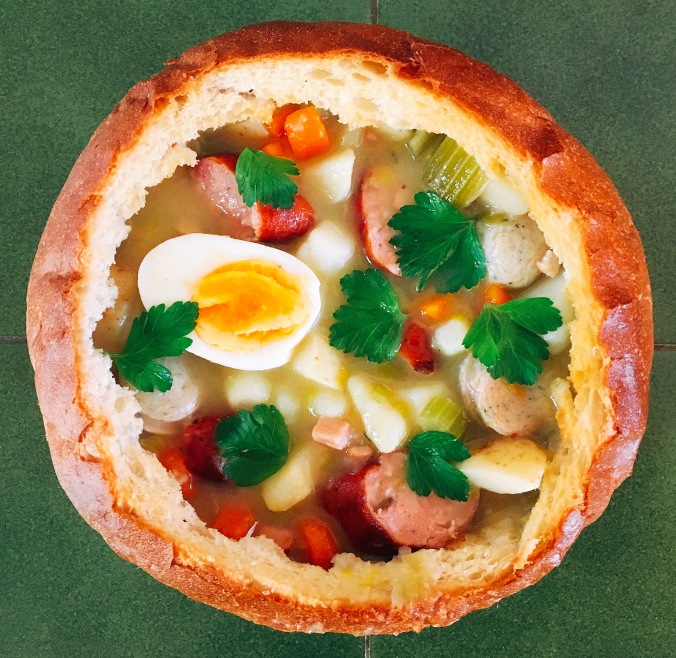 Zurek describes a soup that is made with a basis of fermented rye flour, called zakwas. Zakwas is created by combining rye flour, garlic and water, then leaving it to ferment for a few days. This gives it a savoury and sour flavour similar to sourdough, and indeed the word zurek comes from a Middle High German word meaning sour. To this vegetables are added, such as potatoes, parsnips, carrots, celery and onion, and protein such as bacon, sausage (especially a white sausage) and hard boiled eggs. It can be flavoured with allspice, marjoram, bay leaves, horseradish, pepper and some dairy such as cream or sour cream. I served my zurek in a traditional bowl made of a rye cob loaf, which was particularly nice to sop up the rich soup. Zurek is traditionally eaten mostly at Easter in Poland to celebrate the end of Lent, but is also enjoyed sporadically throughout the year, especially as a hangover cure. The combination of fermented starch and protein would indeed be comforting for a sore head and delicate stomach, so I can see how this remedy would be popular. Speaking of Easter, Poland also has a delightful day called “Fat Thursday”, which is the Thursday before the beginning of Lent, and marks the start of “Fat Week”, when all sorts of sugar-laden and fatty savoury treats are gorged upon in preparation for the abstinence ahead. I think we can all relate to having a Fat Thursday that turns into a Fat Week, can’t we? 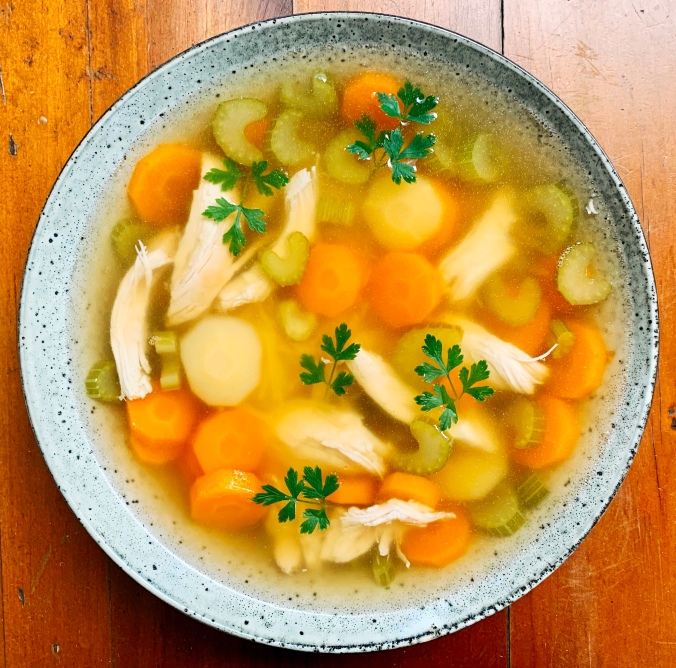 Rosol is a generic term describing any sort of meat broth. The most popular type, however, is rosol z kury, which is clear chicken noodle soup, although other varieties include royal rosol (made of three meats) and hunter’s rosol (made of wild poultry and game meat). This soup can be served at all sorts of occasions from humble family dinners to weddings. Of course, as with many cultures, it is also considered a miraculous cure for the common cold. Although the recipe for rosol is quite flexible, one property in particularly is non-negotiable: the broth must be clear. The ways to achieve this clarity is, first of all, to exclude pork from all preparations, as apparently it causes cloudiness. The second way is to simmer the ingredients on a very low heat for many hours, which somehow makes is equally (or possibly more) flavoursome, but looking like lightly coloured water as opposed to murky broth. Some rosols can include just the broth, made with chicken carcasses only, and others include some vegetables or chicken flesh. However, although a lot of vegetables and flavourings go into flavouring the broth (leek, celeriac, carrots, cabbage, onion, bay leaves, allspice etc), they are mostly strained out at the end and only a few are reintroduced minimalistically. I made mine with a whole chicken, angel hair pasta and garnished it with a sprinkling of parsley. I chose to make rosol specifically this week because my boyfriend was sick and needed something comforting and warm, and of course rosol was the ultimate culinary panacea that it is advertised to be!