Although I don’t remember ever consciously trying any Icelandic food, I have held the vague impression that it’s widely considered one of the worst cuisines in the world by tourists. This may have partly come from notoriously adventurous TV chef Anthony Bourdain’s pronouncement of the traditional Icelandic fermented shark as his all-time worst food experience. Another meal that may have contributed to this reputation is the boiled sheep head, which is singed to remove hair and then served whole. Within the last hundred years, Iceland developed the concept of Þorramatur, which was originally intended to be a banquet to showcase many different examples of traditional cuisine, but has more recently developed into a sideshow of the most unusual food Iceland has to offer, designed to tempt daring tourists ready to torment their picky friends. Perhaps taking pride in oddity is a common trait in Iceland, if the exquisitely eccentric singer Björk is anything to go by. It was with resolution therefore that I embarked upon this week’s research, determined to find something delicious in Icelandic cuisine. Part of my ethos for undertaking this momentous cooking challenge is, in fact, a certainty that all countries nurture wonderfully ingenious humans who have used the available ingredients to concoct the most delicious meals possible. Iceland’s available ingredients are traditionally focused around lamb and its milk to make cheeses, and a wonderfully diverse array of cold-water seafood, including fish, skate, shark, lobster, shrimp and traditionally whale. Other classic ingredients include seabirds and their eggs, freshwater fish, rhubarb, berries, moss, wild mushrooms, thyme, seaweed and local green leafy vegetables. Influences from surrounding countries, particularly Denmark, later popularised vegetable consumption, especially of root vegetables. Although fresh food is favoured in modern Iceland, traditionally, foods needed to be preserved for families to survive the long winter in a variety of ingenious ways. These include being stored in salt, fermented in whey, as well as smoked and dried. Traditionally, home-cooked Icelandic food was served in an askur, which is a lidded wooden cask with handles. Each family member would have their own askur, often decorated to their liking, which they would clean themselves after each meal. But what’s my final verdict on Icelandic food, I hear you ask? I did pick and choose the recipes carefully, but I found all of the meals to be simple and hearty, showcasing combinations of flavours that are so much greater than the sum of their parts. Certainly, then, Iceland does not deserve its bad reputation, and I would love to visit  to try the dishes for which I was not able to source ingredients. Perhaps not the fermented shark though?

Lamb is the main meat eaten in Iceland, and the Icelandic people have a long history of using every part of the animal to ensure nothing is wasted. This includes the whole sheep head I mentioned previously, as well as ram testicles. Traditionally, any meat not able to be eaten immediately needed to be preserved, and some of these preservation techniques became an integral part of the flavour. Indeed, one of the most famous Icelandic meals that I have not made this week, mostly due to supply issues, is smoked lamb leg, which is still served at Christmas. I tried to source some but failed, and was left wondering why we smoke so many pork products but never lamb!? Instead I roasted a lamb rack, which is also popular in Iceland and sometimes served at Christmas. I seasoned it with thyme, cinnamon, ginger, star anise, fennel and cloves, then coated it in a light dusting of fine breadcrumbs before roasting. I stewed the red cabbage with red wine vinegar, cinnamon, butter and sugar, which is very reminiscent of a Danish recipe I made a few weeks back. I also made one of the best bechamels of my life by simply making a roux of butter and flour, then slowly adding milk, salt and pepper. I’ve always gravitated towards chicken, pork and beef before lamb, but lately I’ve been wondering why – it’s so flavoursome and delicious! The whole rack kept each cutlet incredibly juicy during cooking, while the outside formed a wonderful crust. 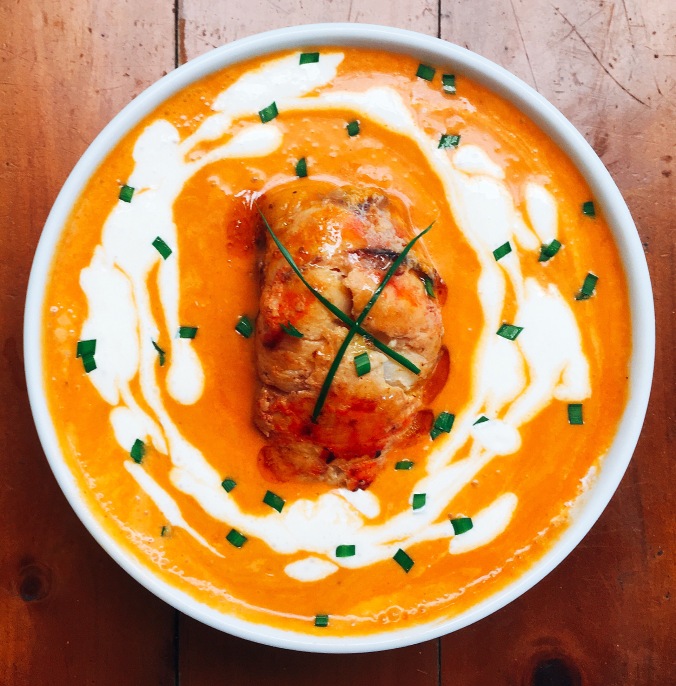 Humarsúpa is an Icelandic lobster bisque, made famous by a restaurant called Saegreifinn (Sea Baron), although it was made by home cooks and restaurants long before then. As the story goes, a retired fisherman named Kjartan Halldorsson set up a shop to sell fresh fish, and some tourists came in to ask him to cook them a fish that they had caught. Kjartan, notoriously entrepreneurial, nipped off to the store to buy a grill, then came back and charged them a small fee to grill their fish. Word of this service spread, and eventually he moved the grill inside and changed his shop into a restaurant, which is now one of the most famous seafood restaurants in Iceland. Kjartan died a few years ago, and although his lobster soup recipe was the most famous attraction of his shop, he apparently never ate any sort of soup (pronouncing it “boring”), instead favouring steaks of minke whale. I am desperate to go to Saegreifinn now! I’ll have to find an excuse to visit Iceland, but at least I can attempt to make the soup in the meantime. Humarsúpa is usually made with local Norway lobster, sometimes called langoustine, although I had to use classic lobster as it was all that was available. It begins with a rich stock made from lobster shells, carrots, celery, onion, leeks, garlic, butter, tomato paste and fish boullion. After simmering for a few hours, this stock is strained and combined with white wine, sherry, thyme, bay leaf, curry powder, lobster meat and heavy cream, then simmered for a further half an hour. I garnished it with chives and cream, and mopped it up with any bread I could find. Heaven. It’s just what I imagine seafood bisques/chowders are like, although I don’t have much experience with either. The tomato added a wonderful sweetness that complemented the lobster, while the combination of cream, white wine and seafood is, in my opinion, one of the finest creations of humanity.

Cod with egg and butter sauce (Þorskur með Eggja og Smjörsósu) is a classic example of the sort of simple meals that rural Icelandic folk might prepare from a fresh fillet of fish and a scattering of vegetables from their garden. It’s traditionally served at Þorláksmessa (Saint Thorlak’s Mass, the patron saint of Iceland) on December 23rd, as it is the last day of the Catholic Christmas fast when meat is still discouraged. At the moment, Saint Thorlak is not officially a saint of anything else, although various movements are campaigning for him to be the patron saint of autism, given that he may have had the disorder himself, and that people with autism often find particular wisdom and comfort in his words. To make the dish, I used cod, baked in the oven with some oil, salt and pepper. I must admit I was slightly dubious about the egg and butter sauce. I’ve had eggs, and I’ve had butter, but there was something about the combination that left me luke-warm. I was a fool, however. Egg and butter sauce is a revolutionary concept that the Icelandic people have been hiding from us all this time. It couldn’t be simpler to make – hard-boil some eggs, then chop them roughly and combine them in a saucepan with melted butter, salt and pepper, with a little parsley on top. The yolks crumble into the butter forming a rich yellow paste, while the whites create a thick texture. The taste was sort of like the best egg-salad sandwich I’ve had, except warm, comforting, and more delicious. The taste of the fish, although nice, was quite irrelevant in comparison. I served the fish with steamed asparagus, fresh watercress and roasted root vegetables (potatoes, swedes and turnips).

Kjötsúpa is the next iteration of my rediscovery of the joys of lamb, in the form of a hearty lamb stew. Traditionally this sort of stew would be the perfect vehicle for turning mutton into tender and delicious meat, because the wool and milk of sheep meant that they were often worth more to families alive than dead, and so lived for relatively long periods until they became mutton. Lamb, onion and leeks are braised, and then simmered in stock for hours along with root vegetables of your choice, such as carrots, cabbage, potato, turnips and swedes. I also added some oats, which were traditionally used in all sorts of Icelandic stews, and are a nice way to thicken the broth. This is then spiced with plenty of salt, pepper, oregano and thyme. The kjötsúpa vastly surpassed my expectations – it reminded me of Irish stew in that it contained lamb and root vegetables, but the addition of turnips, swedes and cabbage created more delicious and complex flavours. Although not pictured, I ate my kjötsúpa with dark rye bread to sop up the liquid. My research has informed me that kjötsúpa is widely considered to be one of the most effective cures for short-day depression, only surpassed by lýsi (cod-liver oil). As an Australian living relatively close to the equator, I won’t pretend to understand how short-day depression might feel, but I certainly felt that the kjötsúpa restored my vim and vigour after a long, hard week.