In Hungary, dishes are classified into two varieties: those requiring a side dish or not. These side dishes are usually made with potatoes, rice or vegetables. Bread is also an important part of the cuisine, eaten with almost all meals. In fact, there was enormous disquiet in the country after the fall of communism in 1990, as the quality of white bread rapidly deteriorated. The spice most synonymous with Hungarian cooking is sweet paprika, which is used sometimes by the handful in a wide variety of dishes. Indeed, paprika is thought to have originated in Hungary, and is made by drying and grinding members of the chilli pepper family. Sweet paprika is one of the mildest types, and is predominantly made with red capsicums. Sour cream is also widely used in Hungarian cooking, as are many varieties of cheese and sausage. Indigenous Hungarians are called the Magyars, and their historic influence can be traced to many extant recipes. For instance, the traditional nomadic lifestyle, as well as their environment of open unforested plains that permitted hunting, has likely influenced the propensity for meaty stews cooked over open fires. There’s certainly an abundance of delicious recipes for a nation homophonous with “hungry”! 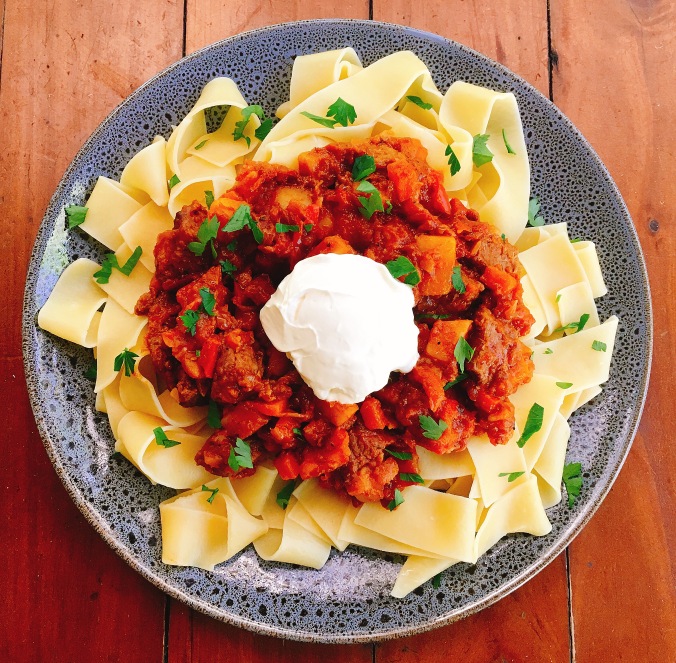 Goulash is often considered Hungary’s national dish, consisting of stewed meat and vegetables flavoured with onion, garlic, bay leaves, vegetables and paprika. I included carrot, potato, capsicum and tomato in my goulash; some of these vegetables were not present in Europe when the first goulashes were being cooked in the 9th century, but are now beloved and traditional ingredients. The word for goulash (gulyás) means a herdsman or cowboy. It probably stems from the practice of herdsmen driving cattle long distances to sell at market, and slaughtering some along the way for their supper, stewing the meat in pots over open fires. It may also have been influenced by the practice of drying meat in the sun and packing it into bags made of sheep stomach in a very early version of instant meals – just add water! So influential has goulash been to the world that it has lent its name to a brand of communism characterised by political and economic freedom, as well a style of the card game “bridge”, where cards are not shuffled well, creating a “wilder” game. It’s traditional to serve goulash with potatoes or egg noodles (I used pappardelle), as well as a generous dollop of sour cream.

Meggyleves derives from “meggy” meaning sour cherry and “leves” meaning soup. In the great tradition of Eastern European brutalist literalism, the dish is indeed a cold sour cherry soup that is served as a starter or side dish to main meals during summer. Sour cherry trees are abundant in Hungary, and the summertime excesses are boiled with sweet spices such as cloves and cinnamon to make meggyleves. The mixture is then combined with cream or sour cream and chilled before serving. This is a lovely sweet and sour soup that provides the epitome of refreshment during summer. It did come dangerously close to impinging on my “no desserts” rule, but given that it’s eaten as a savoury side and is called a soup, I made an allowance. I’m glad I did! When I first saw that Hortobágyi palacsinta might literally be interpreted as “placenta from the region of Hortobágy” I started to worry that this would be one of those rare dishes that was a bit much for me to stomach. However, as far as I can tell, there isn’t a shred of actual placenta in the meal, and instead it derives from a common Latin word “placenta” which means a flat cake. The element of the dish that relates to the region of Hortobágy, however, is less straightforward. Wikipedia claims that it was invented at the 1958 Brussels World Fair, but a similar recipe already existed in Hungary, and its association with Hortobágy was merely a marketing strategy. Whether or not this strategy benefited the dish or Hortobágy itself is an enduring question. It turns out palacsinta describes thin crepes made from egg, flour and milk, which can be served with sweet or savoury fillings. Hortobágyi palacsinta is the most famous of the savoury varieties, and is filled with spiced mince meat and vegetables (I used onion, veal and mushrooms). They are then baked in the oven with a sauce made from sour cream and paprika and served with parsley. I found the crepe wonderfully easy to make and delicious with the meat – this is definitely an easy yet impressive meal to make for guests!

I have a sneaking suspicion that főzelék is one of those dishes championed by economical and cunning housewives, who throw all of the leftover vegetables into a pot, stew them together, and pronounce it “főzelék!”. It ranges wildly in its colours and textures, from deep green to shocking red, and its consistency is usually somewhere between soup and stew. Common vegetables used include some combination of cabbage, potatoes, tomatoes, carrots, peas, kohlrabi, spinach or green beans. I used spinach, potatoes, carrots and green beans, and thickened the stew with a roux of butter, flour and milk, flavouring with onion and garlic. Főzelék is generally vegetarian, but can be enhanced with protein if eaten as a main meal. I included a very spicy Hungarian sausage called csabai and a fried egg in mine, which added a lot of flavour to the vegetables.

Chicken paprikash is a Hungarian dish that takes its name from the liberal amounts of sweet paprika used. Onions, garlic and capsicums are first fried in butter or lard, followed by chicken parts. Chopped tomatoes and stock are then added with handfuls of sweet paprika, and set to simmer until the chicken is tender and infused with the flavours. The stew is then thickened at the end with sour cream and flour. I served my chicken paprikash with green beans and the traditional accompaniment of nokedli. Nokedli are similar to the German spätzle – a variety of pasta/dumplings made from a dough of egg, flour and water, pinched into irregular shapes and boiled until tender. The word comes from the German “nockerl” meaning dumpling, and surprisingly both words are thought to share roots with Latin languages that also gave rise to words like “noodles” and “gnocchi”. The true origin of pasta is hotly debated, with some purporting that Eastern Europe first influenced Italy with these dumpling-like recipes, which the Italians then reinvented as spaghetti after influence from Asia. Others propose that Italy was the true founder of pasta in Europe, either before or after the idea for noodles made it from the Far East. The true history may be lost to time, but I highly recommend cooking nokedli – they have all of the delicious taste of pasta but their rustic shape means that they require zero special equipment and very little patience to create.