The cuisine of Western Africa is predominantly upheld by families uniting to make meals from the produce that they’ve bought, farmed, hunted or gathered. Indeed, most of the food consumed in western Africa is produced locally. A wide variety of native ingredients is used, such as black eyed peas and okra, as well as many that were introduced by European and Arab interactions, such as chillies, tomatoes, peanuts, corn, plantain bananas and cassava. Culinary influence has also extended from Western Africa to many parts of the world, especially the southern USA, the West Indies and the Caribbean, via explorers, travelling missionaries or slavery. Most meals start with a base of tomatoes, onions and chillies, which is built upon with whatever ingredients are to hand. In contrast to North African cuisine, which is characterised by a wide variety of complex spices, western Africans spice their food simply and sparingly, leaving chillies as the main flavour and believing that all manner of health issues can be resolved by their consumption. Chilli also helps to preserve food, and induce sweating, which purportedly helps to stay cool (despite the inferno in your mouth). Although traditional beverages exist, one of the most culturally important drinks in this frequently drought-stricken land is actually plain water, which has ceremonial significance and is customarily the first thing offered to guests. Cheers! 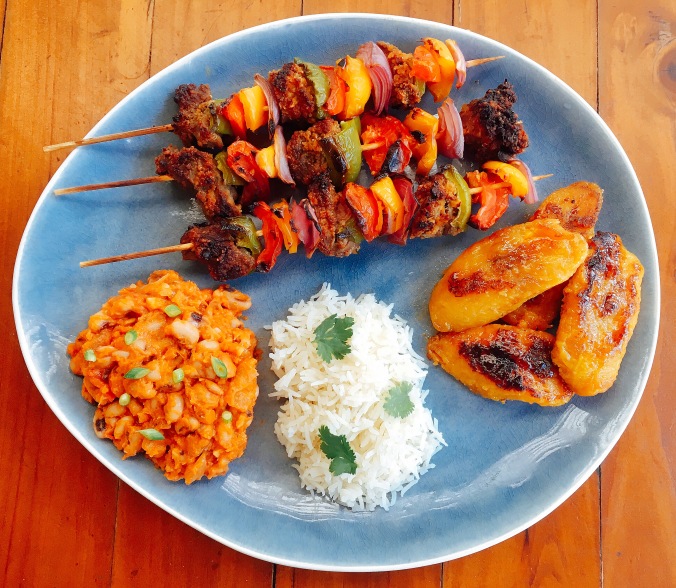 Suya is made with pieces of meat (most commonly beef) coated in a spicy mix of ground peanuts, cayenne pepper and stock powder. These cubes are threaded onto a wooden skewer, with or without additional vegetables such as red onion, capsicum or tomato, then grilled over charcoal. Personally I think that the ground peanut coating is absolute genius and I’ve rarely had better skewers – why hasn’t this caught on!? The peanut pieces get roasted on the outside and impart a wonderful flavour to the meat and vegetables, while still keeping everything tender and juicy within. Red red is a stew particularly common in Ghana, consisting of black-eyed beans cooked with onions, tomatoes, chillies, plantains and traditionally palm oil (although I used vegetable oil). Meats or seafood can be added, however I kept mine plain, which appears to be the more traditional option. I’ve never cooked black-eyed beans before, and was delighted with their flavour and texture – they seem much milder and smoother that other common beans, forming a comforting thick paste and absorbing the flavours of the accompanying ingredients. Fried plantains are an important staple in West African cuisine: they’re known as alloco in Côte D’Ivoire, dodo in Nigeria, makemba in the Democratic Republic of Congo, and kelewele in Ghana. Fried plantains are one of many examples where Africa has influenced various parts of South and Central America, where this side is widely enjoyed and is an integral part of diverse cuisines.

Nkatenkwan is just one of many names for a wide variety of peanut soups and stews found across Western Africa. Often they are called “groundnut stews”, however, as far as I can tell, groundnuts and peanuts are the same thing. I made mine by combining onions, tomatoes, chillies, garlic, ginger and shredded chicken breast, then stewing everything together with peanut butter, peanuts, and chicken stock. I don’t know about you, but I’m nuts for nuts. Some of my favourite stews are those with nut-bases, such as the Thai massaman or the Indian cashew-based curries. However, such is my nut-obsession that none of these have been quite nutty enough. If you have felt similarly, this stew is for you – the peanut flavour is very intense, but nicely offset by the sweet acidity of the tomatoes and umami of the chicken. In Ghana and Nigeria it’s traditional to serve these soups and stews with a big ball of fufu on top. Fufu is a mash made by adding water to a mix of cassava and green plantain flour. It’s eaten as a staple with many different meals, and everyone seems to have a different opinion on its correct starch-to-water ratio. The traditional method of making fufu involves pounding boiled cassava and plantains and then mashing them into a smooth paste. However, many African communities (and me) buy the dry flour mix pre-packaged and only need to rehydrate it and serve. The concept and taste of fufu reminded me fondly of Deb: the dehydrated potato flakes that form a smooth creamy mash when mixed with hot water. Fufu has the same comforting starchiness, but is a little sweeter and with a richer flavour than mashed potato. It’s also a little doughier and more elastic than Deb, which is actually helpful for maintaining structural integrity when served with soups. I really liked the combination of the stew and fufu. However, if you try it, beware – chewing fufu is considered a great faux pas in polite Nigerian or Ghanaian company!

Thieboudienne is a common home-cooked staple, as well as a necessity at celebrations, and indeed commonly regarded as the national dish, in Senegal, although it is also much beloved in Mauritania. So commonplace is the dish that there is no unanimous agreed upon recipe, and each home cook would tailor it to their own tastes and the availability of the ingredients. The name translates literally into “rice and fish” in Wolof, honestly describing the basis of the meal: the catch of the day and rice (often broken rice). The fish is usually stuffed with or marinated in a paste, for instance formed by herbs, garlic and vegetables such as onion, capsicum, chillies, tomatoes. The fish is then fried and removed, and whatever vegetables happen to be on hand and delight the cook are added with water to simmer until tender, often with some more paste formed by similar ingredients to that used to flavour the fish, or with added netetou (a fermented bean paste). Once the vegetables are done, the whole lot is stirred through the partially cooked broken rice, which absorbs all the flavours. I suspect this dish was invented by clever home cooks who realised that this dish is a spectacular and healthy way to make use of a flexible array of ingredients, as well as potentially only dirtying one pot in the process! It’s also a symbol of hospitality (terenga) in Senegal, driven by the custom of friends, family and neighbours gathering around a large platter of Thieboudienne and feasting communally with hands, spoons or pieces of bread as utensils. This shared eating tradition is said to impart the values of patience, consideration and camaraderie amongst the diners, because they must be considerate and measured in their eating to ensure everyone has a fair portion. There’s a lovely ethos in Senegal that “there is always a share for the stranger”, which I think we in the West could benefit from taking to heart. 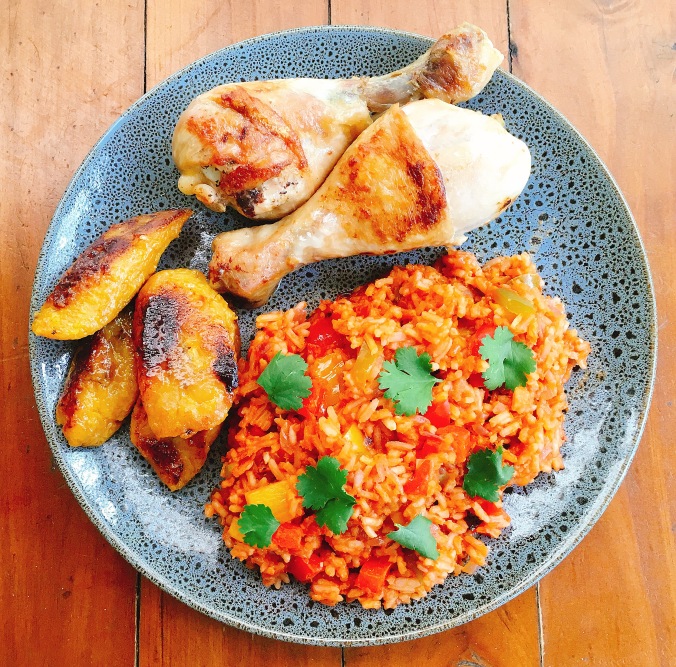 Jollof rice is sometimes touted as the national dish of Western Africa. It consists of rice, cooked with palm oil, stock, tomatoes, onions, chillies, capsicum, ginger, cumin and garlic. The rice takes on the flavours of the stock and tomato as it cooks, and results in a wonderfully savoury and comforting meal. Various meats and vegetables can be included, but I stuck to the basic recipe, sans palm oil. The name comes from the Jolof Empire, which ruled western Africa between 1350 and 1549. One of the most striking things about this empire is its progressive stance towards women, who could have roles in government and even rule states in some cases. Jollof rice also goes by the name of benachin, which means “one pot”, referring to the simplicity of cookware required for the dish. Nigeria and Ghana seem eternally locked in a dispute over the origin of jollof rice, as well as which country’s recipe and presentation is superior, even organising internationally-judged competitions in an attempt to settle the argument. I have more sense than to wade into that particular argument however, especially given my amateur familiarity with the subject! I served my rice in a typical manner,  with fried plantains and chicken, which I lightly seasoned and grilled.