Singaporean cuisine is a fusion of many surrounding influences, including Malaysian, Chinese, Indonesian, Indian and Western. Singaporean culture places a particularly high important on food and eating, declaring it a national pastime and obsession, and celebrating annual food festivals every July. In fact, the love of food is so entrenched in the culture, that it is common to ask “have you eaten?” when you meet a new person, in place of “how do you do?”. A lot of the food for sale in Singapore is served in hawker centres, which are sort of a cross between food courts and street food. So strong is the culture of this high-quality “fast food”, that two hawker stalls became the first street food purveyors to earn Michelin stars in 2016, one of which serves the world’s cheapest Michelin star meal. The mixed influences through this region have developed a wonderful diversity and quality of food, but also caused contention between the countries regarding the true origin of certain dishes. For instance, Malaysia’s tourist minister has made a number of grave allegations that other countries have been “hijacking” their food. Indeed, it’s difficult to try to discern where dishes actually originated, but I would encourage everyone not to worry too much about that, and just revel in the fact that, the more people are cooking these amazing meals, the more chance there is to eat them! 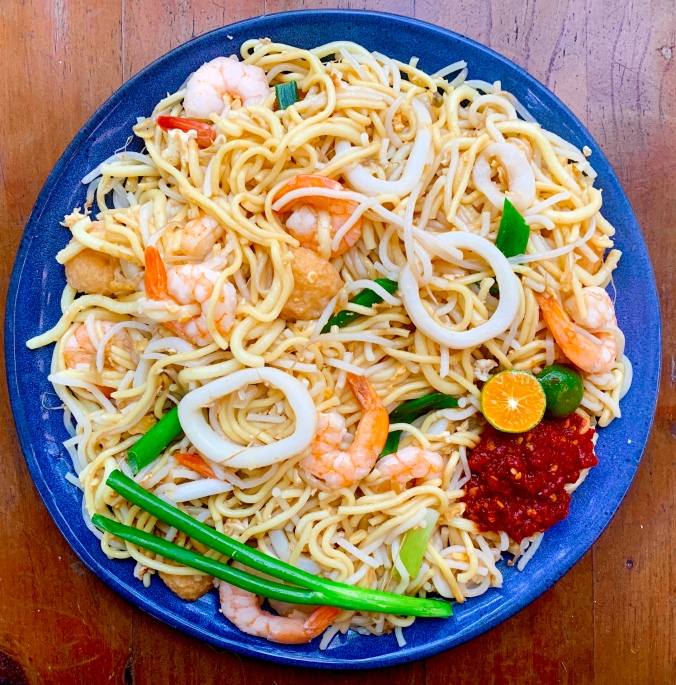 Hokkien mee was purportedly invented by Chinese sailors working in Singaporean factories, who would fry up noodles over charcoal during their lunch hour. One of the most important components of Singaporean Hokkien mee is the stock mixed through the stir fried noodles, which I made by boiling water with garlic, shallots, prawn shells, fish sauce, dried anchovies, white pepper and shrimp paste. For the stir fry itself, I used a combination of thick egg and thin rice noodles, and stir fried them with prawns, squid, bok choy, Chinese sausage, beansprouts, egg, garlic, fish sauce, sesame oil, spring onions, lime and chilli paste. This dish is one of the most common noodle dishes in Singapore, as opposed to the “Singapore noodles” known by the western world, which has a base of thin vermicelli noodles and curry powder, and which, confusingly, does not exist in Singapore in any capacity. I used fresh noodles for this dish, which gave it a particularly nice texture, and also meant that the whole thing only took a few minutes to prepare and cook.

This dish purportedly originated in Palm Beach, Singapore, from a pushcart food vendor, although, as with many dishes, there are also claims that it is originally a Malaysian dish. Mud crabs are generally used, which have the advantage of being large and having lots of flesh. Luckily, mud crabs are also plentiful in Queensland, and I was able to procure some for this meal. I then stir fried the crab with tomato passata, fish stock, palm sugar, white vinegar, soy sauce, butter, chilli, spring onions, fresh coriander, egg and cornflour to thicken it. The end result is actually not super spicy, despite what the name suggests. I had never tried chilli crab before this meal, and was a little concerned about how it might turn out, despite it being widely considered to be Singapore’s national dish. The thing is, I’ve long held a strong opinion that often crabs and other crustaceans are ruined by combining them with strong flavours. I’ve always preferred crab served cold and plain, with a little bread, avocado and lemon on the side. The sweet, clean taste can shine through in that preparation and I’ve never tasted better. Until now… It turns out that chilli is a fantastic accompaniment to crab that I would never have thought of, as it lets the cool, fresh taste of crab take centre stage, except this time, by contrast. Despite being one of the most delicious dishes I’ve eaten, it also happens to be one of the messiest, so I was pleased to be at home in an old set of clothes and in easy reach of a sink and soap. 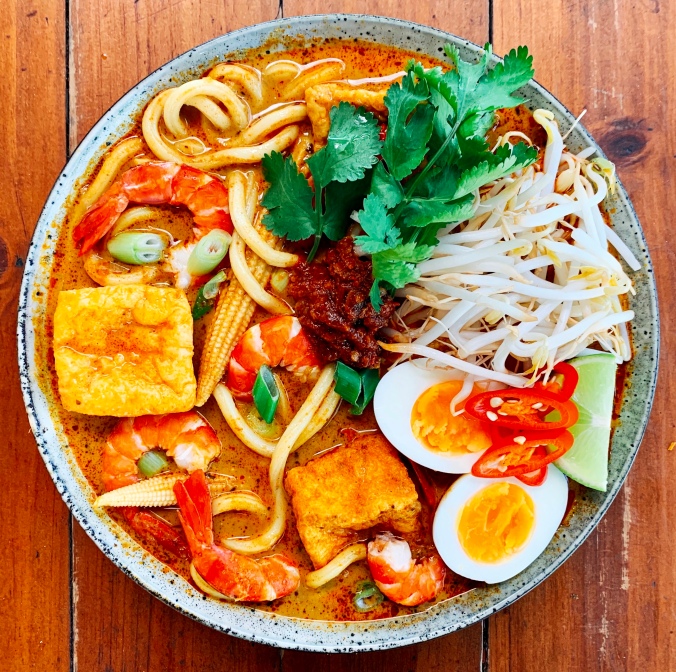 Laksa is a spice noodle soup that’s a bit of a contentious dish, because its origins are hotly debated between Indonesia, Malaysia and Singapore. The recipes differ between these regions, and I have more sense than to wade into the debate of origins, other than to say that my rules of choosing dishes do not necessarily imply that they originated in that place, but rather that they are commonly eaten there. Also, I already had other dishes planned for those places, and I had to make laksa somewhere! Laksa is a spicy noodle soup that comes in three main varieties: curry (which is coconut milk and curry-based), asam (which is tamarind-based) and sarawak (which is coconut milk-based without curry). I decided to make curry laksa, which, as I understand it, is the more popular variety in Singapore. I first made a base paste for my curry laksa, by food-processing shallots, garlic, chillies, shrimp paste, candlenuts, sugar, salt, coriander, lemongrass and curry powder. Once this was fried, I added stock and coconut milk, and simmered it all together to make the soup. I went a tad overboard with my other laksa ingredients, but I do like variety! I added prawns, bean sprouts, bean curd puffs, boiled egg, baby corn, lime and lots of chilli. My parents have always adored laksa of all varieties, but as a kid I was repelled by their very spicy nature. However, now, after many years of trying to slowly build up my chilli tolerance, I greatly enjoyed my laksa. There’s something perfect about the combination of chilli and the cool sweet flavour of coconut milk that makes this dish so special.

I’ll be perfectly honest with you from the outset: I initially avoided making this dish. I’m slightly ashamed to admit that my hesitation was predominantly based in aesthetics, with even the most professional of google images displaying pallid and slightly gelatinous looking chicken accompanying plain rice. “Hospital food”, I thought, “surely it will be as unappealing to eat as it is to look it”. However, any list of typical foods of Singapore prominently featured this dish, and it is even regarded by many as its national food, and so, I felt obligated to try. I am pleased to inform you therefore, dear reader, that I was apocalyptically wrong to doubt the deliciousness of this meal. Everything that it may lack in aesthetics is more than remedied by its glorious flavours, and I can now clearly see why Singapore holds it so dearly to its heart, like the ugly duckling that reveals itself to be a glorious swan once it reaches your taste buds. The beauty of this dish lies in part in its simplicity: a whole chicken is stuffed with ginger, shallots, rice wine, soy sauce and sesame oil, and poached very slowly in barely-simmering water for up to an hour until cooked. It’s then carefully removed and placed in an ice bath to stop the cooking process and keep the skin intact and springy. Meanwhile, the stock that the chicken was cooked in is reduced to concentrate all of the flavours, and then used to simmer long grain rice that has been lightly toasted in garlic, ginger, pandan leaves and some of the rendered fat from the chicken, giving it its alternative name “fatty rice”. Right before serving, the chicken is lightly coated in a soy and sesame oil rub, carved into bite-sized pieces, and accompanied with various dipping sauces, such as a chilli sauce and a ginger, shallot and oil “green” sauce. The taste of chicken is complemented, but not overwhelmed, by the subtle and fragrant flavourings, while its texture is wonderfully juicy and soft.  Meanwhile, the rice absorbs the chicken and spice flavours and could be eaten alone by the truckload. Even aside from the initial dubiousness of its appearance, the status of this dish as Singapores national meal is made even more confusing/unlikely by its name, which refers to Hainan, a province in southern China. It has origins in an ancient Hainanese dish called Wenchang chicken, but was brought to South East Asia by Hainanese immigrants. The popularity of Hainanese chicken rice rose during World War II in Singapore, when the Japanese occupation expelled many of the British, and the servant-class Hainanese immigrants that had been working for them were suddenly out of work. Many then opened restaurants, and particularly focused on serving chicken rice, as it was a relatively frugal way of extending the taste of a single chicken to lots of cheap rice. Since then, the dish has only increased in popularity throughout Southeast Asia, as well as spreading to the rest of the world, earning a place in a 2018 list of “World’s best foods” as well as other esteemed titles such as “one of the most beloved culinary exports of Southeast Asia”. All completely fitting accolades if you ask me!