In reality, China is so large and diverse that it is often divided into as many as eight cuisines. However, my restriction of 80 cuisines (and the fact that at some point I want to get my life back) means that I have split it into just two: north and south. The major distinction I have found between the cuisines of southern and northern China is that the former relies predominantly on rice as the staple carbohydrate (steamed white rice, congee etc), while the latter features much more wheat (noodles, dumplings, breads). This is predominantly due to environment; the south has warm and rainy conditions ideal for rice, while the north is dry and colder. The north also has simpler, blander food, while the south is known for its variety of spices and ingredients, as well as abundant seafood. Chinese food, especially Cantonese cuisine, is well known in the western world, evidenced by the fact that at some point there were even more Chinese restaurants in the USA than McDonald’s. This may be partly due to the early Chinese immigration to the USA and Australia during gold rushes. The dishes served in these restaurants, however, have evolved and adapted to suit Western palates, rendering most, if not all, dishes unidentifiable from their origins. The popularity of USA television in China has led to the establishment of USA-Chinese restaurants there, where they even import ingredients from the USA to specifically achieve the right balance of fusion. Chinese food is also intrinsically linked to traditional medicine, and foods are often classified into three categories: cooling foods (such as tofu and celery), warming foods (such as chilli and onion) and neutral foods (such as rice and mushrooms). Some of these make sense to me (such as celery being cooling and chilli being warming), but I don’t know how others were classified. Certain imbalances of yin and yang, and therefore subsequent common ailments, can be diagnosed as the body being too cool and warm, and treated with the ingestion of the opposite category of food. I’m intrigued by the history of this custom, although a little intimidated that a second layer of judgement might be applied to my ingredient choices…

Steamed whole fish is very popular all over China, but especially during Chinese New Year. One of the reasons for this is that the word for fish sounds a bit like “abundance”, which may portend good luck for the year ahead. I used a small snapper and steamed it covered in ginger inside and out. Once the fish was ready, I poured a sauce of soy sauce and rice wine over the top, and sprinkled some coriander and scallions over the top. I then finished the dish by pouring some piping hot oil over the top of everything, which cooks the garnishes and releases their aromas dramatically, as well as giving the outside of the fish a great texture and flavour. Congee is a staple throughout Asia, thought to have originated with the Tamil people of ancient India and subsequently spreading across the continent. It is a savoury porridge made by boiling rice until it forms a thick creamy porridge. This very bland mixture can be eaten alone, usually by the sick, young or elderly, or combined with flavourings such as stock, meat, salted duck eggs, ginger, fish paste, pickled tofu, mushrooms, soy sauce, fried breadstick or fish to create a tasty meal or side dish. Congee is particularly beloved for breakfast, where its oft-fishy flavourings famously leave travelling Westerners missing their cornflakes. Give me congee over cornflakes any day! Egg drop soup is a simple preparation of chicken broth seasoned lightly with white pepper and scallions, to which beaten eggs are briskly added right at the end of cooking to create thin whip strands texturing the soup. I must admit, the ingredient list and preparation for this soup seemed so simple that my expectations for its outcome were not high, but I was astonished at how delicious such an easy soup could be. I will certainly make it again when I’m feeling lazy and need to empty some of the many litres of home-made chicken stock constantly occupying real estate in my freezer, and I think next time I’ll include corn kernels, a popular addition in China. 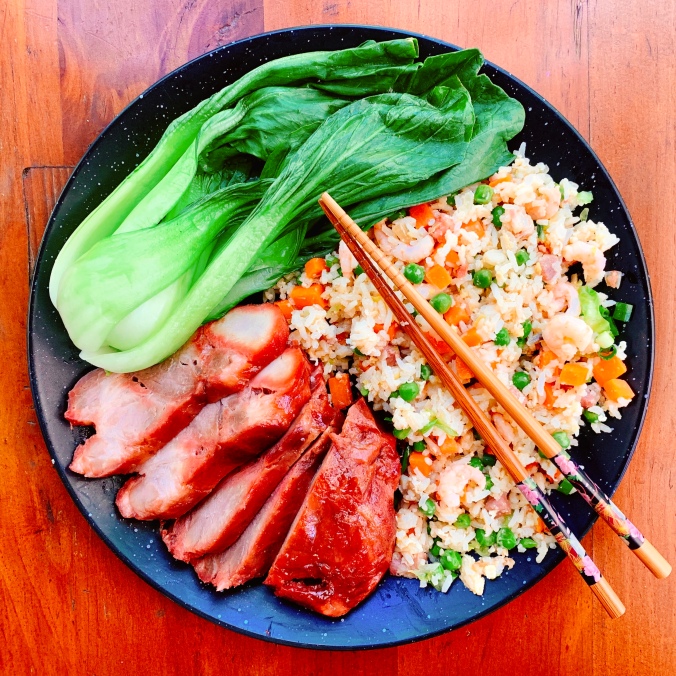 Char siu pork, also known as Chinese BBQ pork, can be recognised by its distinctive sticky red coating. The overnight marinade is made by boiling honey, hoisin sauce, oyster sauce, soy sauce, five spice powder, Chinese rice wine, red food colouring and sesame oil in a saucepan. I then roasted the pork in the oven, continuing to baste all the way through the cooking process to ensure a thick sticky glaze. Fried rice is a recipe created from the desire to use up remaining leftovers, and can therefore include infinite combinations of ingredients. I made mine by frying up some shallots, garlic, Chinese sausage and carrots, then pouring in pre-cooked rice with some peas, rice wine and soy sauce. I added the prawns right at the end so that they didn’t overcook, as well as some sections of rolled-up omelette that I had cooked earlier. I could eat fried rice infinitely; it has a great combination of flavours, with every bite being a little bit different. 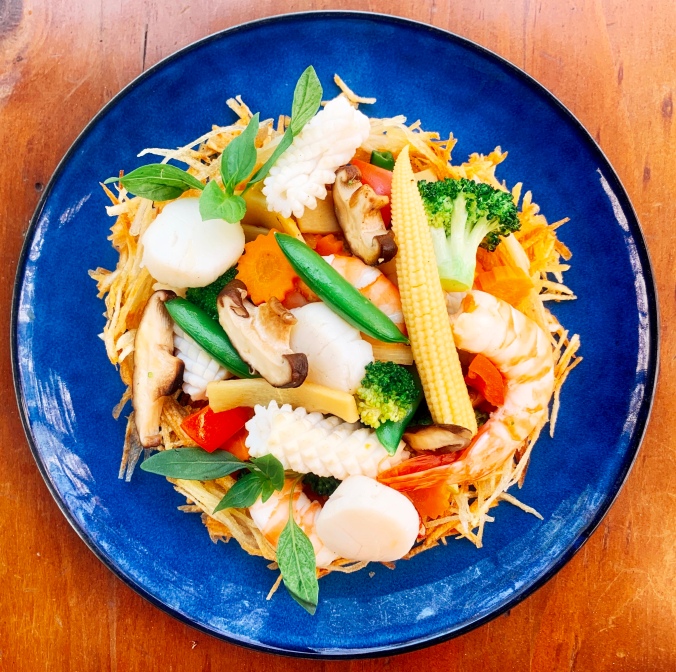 China has such an immense diversity of dishes that it was even more difficult than usual for me to pick just four to represent even half of the country. Seafood bird’s nest therefore is merely a representative of a vast array of stir-fried dishes, with this one being particularly popular in Hong Kong, and one of many possible dishes commonly served during long and decadent banquets. I was drawn to choose this dish specifically because of the strange beauty of its contrast of the symbolic bird’s nest, made from deep-fried noodles or grated taro root, filled not with poultry or eggs, but with the seemingly contradictory plethora of seafood. I first constructed the nest by thinly julienning taro root, then deep fried these strands pushed together between two metal sieves. I was very impressed by how easy this process was compared to how perfectly the faux bird’s nest turned out! The nest can also be formed by deep frying thin noodles, but I rather liked the irregular and twig-like consistency of the shredded taro. To make the seafood stir fry, I combined rice wine, white pepper, cornstarch, a tiny drop of soy sauce, garlic, ginger, shallots, baby corn, sugar snap peas, carrots, broccoli, bamboo shoots, red capsicum and shiitake mushrooms with prawns, squid and scallops. I was initially worried that this combination would end up a little bland, but in actuality it was perfectly aromatic and subtle, letting the sweet and soft flavours of the seafood speak for themselves, lightly accented by ginger and garlic. Stir frying as a technique is thought to have originated in China as far back as the Ming dynasty in the 1300s, and possibly even from the Han dynasty in early BC. Over the centuries, the wok has been refined and oil has become cheaper and more available, as the delicious, fast and healthy technique has skyrocketed in popularity all over the world. In modern China, stir fries can be broadly divided into “chao” which involves a liquid and results in softer ingredients, and “bao” which describes a drier stir fry where the components become crispy. The magical quality of stir fries is described in China as “wok hei” roughly meaning “breath of the wok”. This describes the wonderful caramelised taste that basic ingredients take on, simply from being cooked in the manner, even without any other flavourings.

The Sichuan province is located in south western China, and is renowned for its strong, spicy food. One of the most famous flavours from this region is Sichuan pepper, which is a husk from a type of plant that is actually more related to the citrus family than chilli or black pepper, and is famous for causing a tingling, numbing sensation in the mouth, followed by extreme heat. Sichuan chilli chicken, also sometimes called kung pan chicken, is a stir-fry dish where chicken cubes are first coated in Sichuan pepper and five spice, then rolled in corn flour. This process ensures the chicken is tasty, and nicely browned and a little crispy on the outside. These are then flash fried in a wok along with garlic, ginger, dried whole chillies, peanuts, as well as Chinese rice wine and soy sauce. I served mine on a bed of steamed white rice and garnished with chopped shallots, and alongside some spicy blistered green beans, also common to the province. I have been gradually building up my tolerance to spiciness, having previously ordered everything mild like a total wimp. In the last few years, I’ve started really enjoying the numbing of my mouth with moderately spicy foods, although I’m still at amateur levels in the grand scheme of things. I therefore made this dish slightly milder than the recipe prescribed, but really enjoyed it. I’ll work up to extreme levels eventually!