Cuba and The Lucayan Archipelago consist of islands in the north of the Caribbean. The cuisines are influenced by Native American, Spanish, African, USA, and other Caribbean foods. The tropical climate has played a large role in traditional recipes, with ingredients such as bananas being integrated in many savoury dishes. Similarly, being island nations, seafood is a staple of the cuisines, with notable ingredients such as conch. Cuba is perhaps most famous for the communist dictatorship led by Fidel Castro and the subsequent poor relations and trade embargoes with the USA. Its unique circumstances over the past decades have also resulted in it being the only country in the world to meet the WWF’s criteria for sustainable development. I had the opportunity to visit this incredible country recently, and it truly is an unparalleled time-capsule into the past, and I came away with fond memories of the friendly locals, stunning architecture and scenery, and a billion pictures of vintage cars. The highly communist ethos of Cuba has resulted in most restaurants offering two pricing schemes for meals. The first, for locals, can be hundreds of times less than that charged for tourists. Given that isolated communism relies somewhat on a closed-system economy, this seems fair enough, and the food is still reasonably priced compared to Australia, and very delicious. A memorable food-related experience for me was breakfast at the hotel buffet. There was more variety than I had ever seen before, with tables groaning under the weight of bain maries boasting local delicacies of bean dishes, flavoured rice, vegetable stews, salads, assorted seafood, meat stews and tropical fruit. Also offered was the stock standard continental breakfast options you would find at any large international hotel. Of course, I instantly bypassed these and piled my plate with as many exotic Cuban dishes as I could carry, but every day I was increasingly shocked and appalled to notice the other hotel patrons avoiding them. How can you walk past all of that wonderful food and choose a plate of cornflakes or white toast with butter? Where do these people get their dietary fibre from? Why even go travelling if you aren’t going to try the amazing food!? My despair over the dietary habits of fellow tourists aside, my stay in Cuba consolidated my long-suspected adoration of food from this region. The tropical fruits adding delightful hints of zest and sweetness to the spicy meat, fresh seafood and healthful mounds of beans and rice all constitute my ideal daily fare. 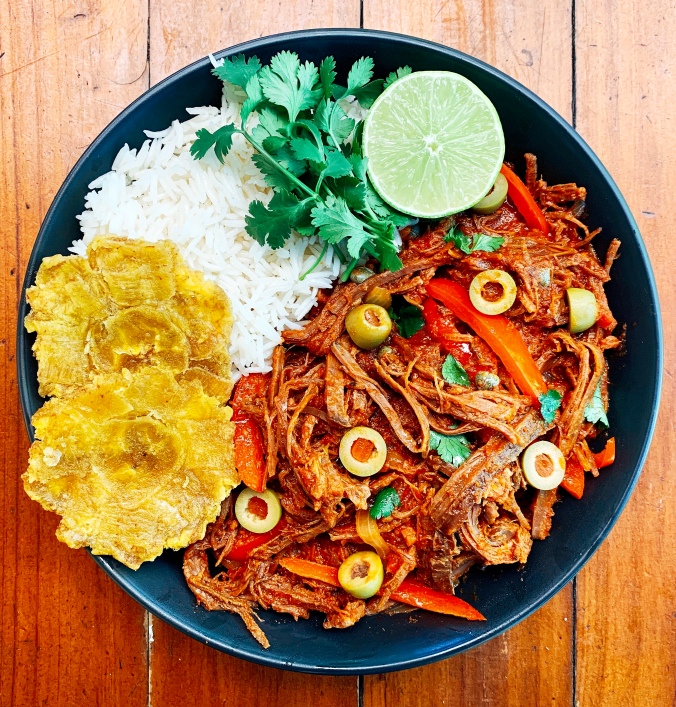 Ropa vieja is almost indisputably the national dish of Cuba, originating in the Iberian peninsula of Spain via the Canary Islands, with the name literally meaning “old clothes”. Appetising, no? The reference comes from stewing beef until it falls apart into long strings. I was actually surprised when I cooked it by how much it does look like fabric – as if tightly knitted strands of wool have come undone into very kinked ribbons. Legend has it that the mythical creator of ropa vieja was so poor and hungry that he set some old clothes to boil in a pot, then prayed with all his might that it might become a meal that he could feed his family with. And so, miraculously, the concoction turned into a hearty and delicious meat stew. Ropa vieja is made by stewing beef flank steak, tomatoes, onions, capsicum, garlic, cumin, coriander, paprika, green olives and white vinegar together for many hours (ideally in a slow-cooker). I served my ropa vieja with white rice cooked the Latin way, by frying it in oil with some garlic and onion to separate the grains then adding stock to make it very flavoursome. I also served patacones, which are squashed fried plantain bananas. This dish was consolidated as a firm favourite of mine while visiting cuba, and I was never disappointed by its preparation from the most humble of street vendors to established fine restaurants. It is truly the great equaliser – very appropriate for Cuba!

Conch is a common name for a wide variety of large shell species, but the Queen among conch is literally the “queen conch”, which is edible and native to the Bahamas, a part of the Lucayan Archipelago. The shape of the conch is perhaps most synonymous in the English speaking world with “The Lord of the Flies”, where its abilities as a loud musical instrument are featured, the shell ultimately serving as a symbol of the beauty and ultimate fragility of democracy. The inside of the conch is also often beautifully coloured, with the pink shiny interior of the queen conch traditionally being made into jewellery or other decorative trinkets. Conch meat is eaten all over the Caribbean, and can be found inside burgers, chowders, soups, stews, salads or snacks. A friend of mine grey up in the Caribbean and relayed fond memories of her childhood fishing from boats for the day. They would usually eat freshly caught conch as a light lunch on the boat, cured with lime juice, flavoured with coriander and scooped up with savoury crackers. Sounds like heaven! I replicated this ceviche-like traditional idea of “conch salad”, combining conch meat (I could only find canned, I’m desperate to come to The Bahamas for the real deal!), a combination of freshly squeezed citrus (orange, lime and lemon), some hot peppers, coriander, cucumber, assorts capsicums, red onion and tomato. I served it rather ostentatiously inside a very old conch shell that was bequeathed to me, alongside fried plantains, avocado and cracked conch. Cracked conch is often said to be the national dish of the Bahamas, and is simply made by battering conch meat and deep frying it until golden and crispy. Of course, as with all deep fried treats, it was delicious, but perhaps an unnecessarily overpowering and indulgent treatment of the delicate and precocious conch meat, so int he end I much preferred the salad. 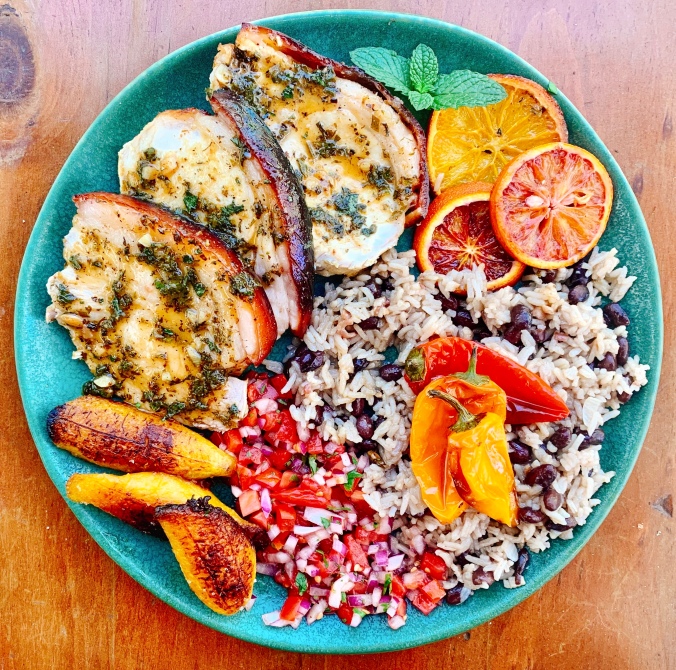 Lechon asado (barbequed pig) and pernil (roasted pork shoulder) are examples of typical roast pork dishes that are incredibly popular in Cuba. I roasted and served mine with a “mojo” sauce made from a mix of garlic, herbs (oregano, mint etc), cumin and orange juice, and which originated from immigrants of the Canary Islands. Slices of leftover roast pork form a major ingredient in a dish that may be conspicuous by its absence from my list if you are from an English-speaking part of the world: the Cuban sandwich. A Cuban sandwich (or “Cubano”) describes a white role containing generous portions of slices roast pork, alongside cheese, ham, pickles and mustard, grilled in a sandwich press. I opted not to include it because it is clearly documented to have originated in Cuban immigrant communities in Florida, and not Cuba itself, although perhaps drawing inspiration from the “medianoche” sandwich served in Havana’s night clubs after midnight. This notion was consolidated when I only saw one Cuban sandwich for sale in my entire stay in Cuba, and that was clearly catered to the high expectations of visiting tourists. Roast pork itself is more commonly served with salads, rice, beans, and rice and beans. Yes, that “and” should not be an “and/or”; I frequently ordered meals in Cuba that came with a side of plain rice, plain beans and mixed rice and beans, the latter considered an entirely new dish by virtue of its combination. As a hardcore rice and beans fanatic, I had no complaints!  The mixed rice and beans dish is often called Moros y Cristianos, meaning “Moors and Christians”, but of course there aren’t any people cut up inside, likely taking its name from a now politically incorrect comparison of skin colour in reference to the Islamic invasion of Spain in the early 8th century. However, as distasteful as the name may be, its subject is very delicious. I cooked them together with bacon, cumin, garlic, green capsicum, onion, oregano and red wine vinegar.

Peas ’n’ grits and ‘penn on

This is a typical dish of Turks and Caicos Islands, which are part of the Bahamas island chain, and which are currently a British overseas territory. Where other parts of the Caribbean are famous for “rice ’n’ peas” (peas actually describing beans, not garden peas), in this Island nation, grits (cornmeal porridge) are combined with any variety of bean on hand as well as onion, garlic, tomatoes, thyme, hot peppers, and whatever else might be on hand to create a delicious and filling staple. Alongside the peas ’n’ grits is the wonderfully mysterious accompaniment of “‘penn on”, a contraction of the English phrase “depending on”. This meal is therefore flexibility incarnate, but usually involves some kind of seafood, depending on the seasonal availability of marine life, the luck of the fishermen, the market price of their catches, the mood of the cook when deciding how to prepare it etc. For my ‘penn on, I originally had planned on a different seafood dish, but chanced upon some relatively cheap lobster, and as lobster is a common delicacy throughout the Caribbean, decided to embody the opportunistic and flexible spirit of the meal and serve the crustacean instead. I think the cryptically named ‘penn on will feature prominently in my planned menus in the future, and I encourage you to also use it to assuage the impatience of pushy future dinner guests when they ask “what will you cook?” “‘’penn on, it has origins in the Caribbean, you’ll see!”.