Most people who identify as “Australian”, excepting indigenous Australians, of course, are actually acutely aware of a different heritage(s) from a not-so-distant past. I think that this is part of what makes Australian cuisine so multicultural, and part of what has made me interested in international customs, languages and food. I am aware of English, Scottish, Welsh, French and Danish ancestry in my family, but the one that everyone is most aware of on my Dad’s side is Irish. This might have something to do with the “family farm” in a tiny town of rural Ireland, where people who share my last name have been dairy farmers for centuries, the most recent descendants, some of whom I have met, still share my last name.  I’ve never visited this town, or indeed Ireland, but I have always been very taken by its descriptions. Apparently the pubs outnumber the grocery stores by at least three to one, and there is a competing dairy farm across the road from “ours”, which is a nemesis, but also somehow equally related to us due to all of the intermarriage through the centuries. It all sounds delightfully quaint and eccentric to an Aussie girl, and I would love to visit some day, although I think I may get giddy upon exposure to all of that green. I didn’t know much about Irish food when I was starting out with this week, and when I asked an Irish colleague of mine for advice she replied something to the effect of “oh Jesus, I don’t know, potatoes and cabbage I s’pose?”. I really hope you read that with an Irish accent, because I wrote it with one. It turns out that potatoes and cabbage are indeed important elements of Irish cuisine, so important that I bought 4 kg of potatoes and ran out halfway through the week… Apparently a lot of traditional Irish culinary knowledge was lost during the potato famine, because potatoes were just about the only ingredient available for many years prior to the potato blight that was so destructive. Some of this knowledge has been recovered, however, and potatoes have been integrated in a much more balanced (albeit bountiful) way in modern cuisine. 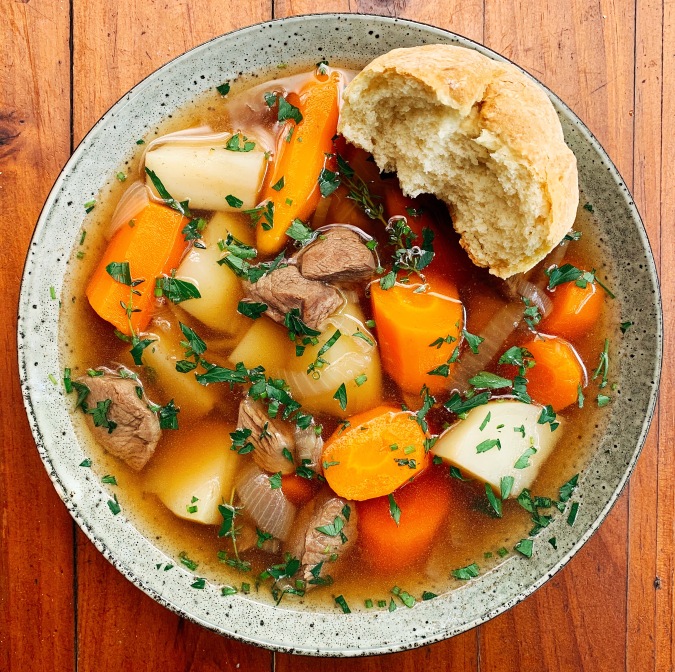 Irish stew is traditionally made with lamb or mutton, although there are many recipes for beef versions around. Dishes that make good use of mutton (usually by slow-cooking) are important to regions that use sheep primarily for wool or milk, as the older animals can be put to a final use when they stop producing. I elected to use lamb, as mutton is tricky to find, and to be honest it’s a bit strong for me. The other ingredients in Irish stew are onions, potatoes and parsley. Some say carrots are not traditional, but I love carrots and I think they add a much needed splash of sweetness and colour, so I included them. Soda bread is made with baking soda to leaven the dough instead of yeast, which is a much faster process. The flour used in Ireland to make soda bread is often wholemeal, and the other ingredients include salt and buttermilk. The buttermilk (or other sour dairy products, such as yoghurt) is an important ingredient because if you ever made a model volcano, you probably learned that baking soda doesn’t make bubbles unless you add vinegar (acid). The net result is a fluffy, airy bread on the inside that’s slightly sour, and a hard chewy crust on the outside, which is particularly good for maintaining its integrity while scooping up stew. Apparently the cross is usually cut into the top of the dough in order to more easily divide the bread into four portions, but I have my suspicions about a plot to subliminally convert people to Catholicism. I took this dish to a St. Patrick’s day party that two of my Irish friends held at their house, and it was a great dish to share, not to mention, good for lining some stomachs. 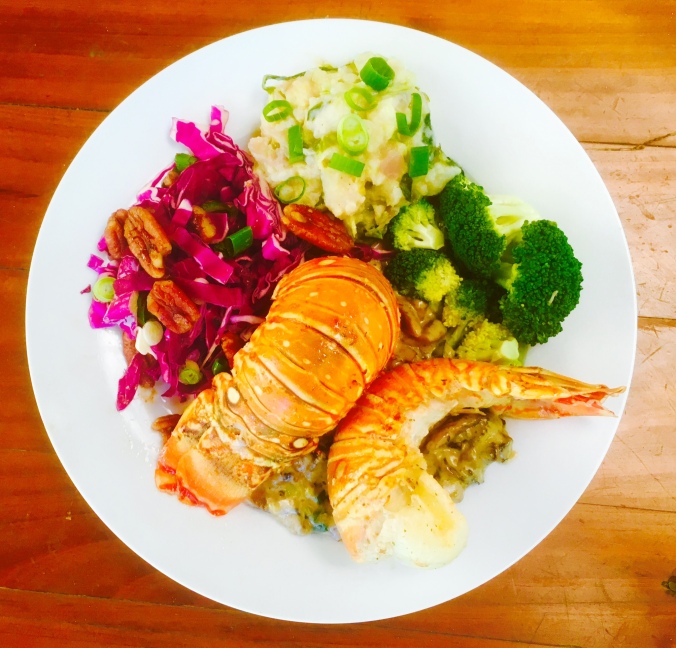 A Dublin lawyer is a dish of lobster cooked in whiskey, cream, lemon and mustard. The reason why it’s called a Dublin lawyer doesn’t seem to be clear, but my preferred option is that Dublin lawyers are renowned for being rich, a little bit fishy and full of whisky. Ireland is actually a big producer of lobster, but not many of the locals include it in their daily diet, as most of it is exported. Lobster is always delicious, and although I think the heavy sauce wasn’t necessary, it was certainly welcome. Colcannon is made with ingredients such as potatoes, cabbage or kale, spring onions, leeks, onions and bacon, all mashed together into a comforting paste. Apparently it’s an Irish custom to hide things in the colcannon on various family occasions, such as rings, thimbles and coins. My boyfriend Rodrigo can eat food pretty quickly, so I didn’t hide any small inedible objects in my colcannon for fear that he would choke to death. Besides, I don’t own any thimbles. The purple cabbage salad and broccoli represent my weak attempt to inject some fresh vegetables and bright colours into Irish week, but I’m pretty sure that both of those ingredients do exist in Ireland, so I don’t feel too guilty about it. 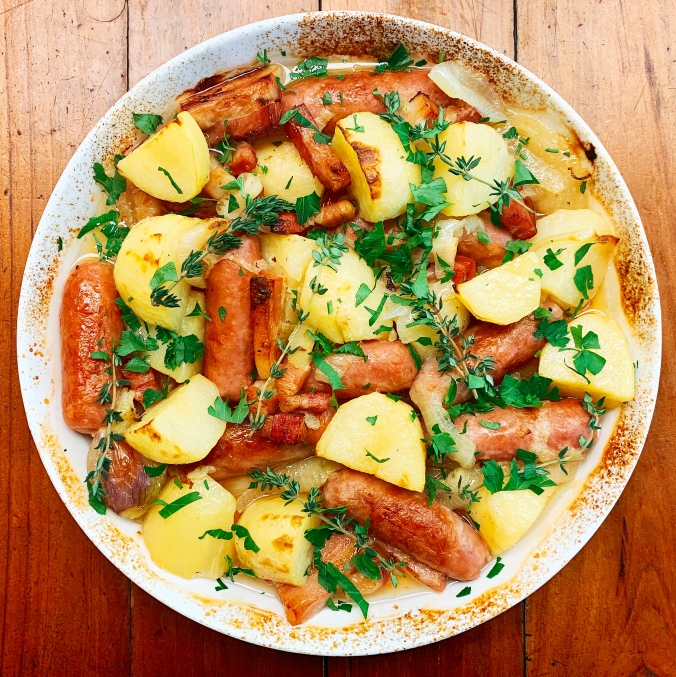 Coddle is a dish made to use up leftovers. As someone who truly hates to throw out food, I can get behind all dishes that begin with this ethos. These frugal, practical origins mean that coddle is quite flexible in its components, but often contains bacon, pork sausages, potato, cabbage, onion and parsley. The ingredients are piled into a pot with a splash of water or stock, then slowly cooked/steamed (often in the oven) until all of the flavours are combined. To coddle something means to cook it immersed in water at a lower temperature than boiling, so I suppose the name of this dish is coddling exemplified. Coddle is particularly associated with Dublin, where in days of yore it was most often eaten on a Thursday, to use up all of the leftover bacon and sausages before Friday when meat was to be avoided. The dish also has an impressive list of literary giants devoted to it, with reports that Seán O’Casey and Jonathan Swift both claimed coddle as their favourite meal. It goes without saying that coddle is the epitome of comfort food, as so many leftover dishes are (bubble and squeak, pot pie, fried rice etc), and therefore also pretty heavy on the starch and fat. I wouldn’t want it every week, but if it were a rainy winter’s eve and I came home after a hard day to a pot of coddle and warm slippers, I confess that I would be a happy lady.

Steak and Guinness cottage pie with corned beef and cabbage 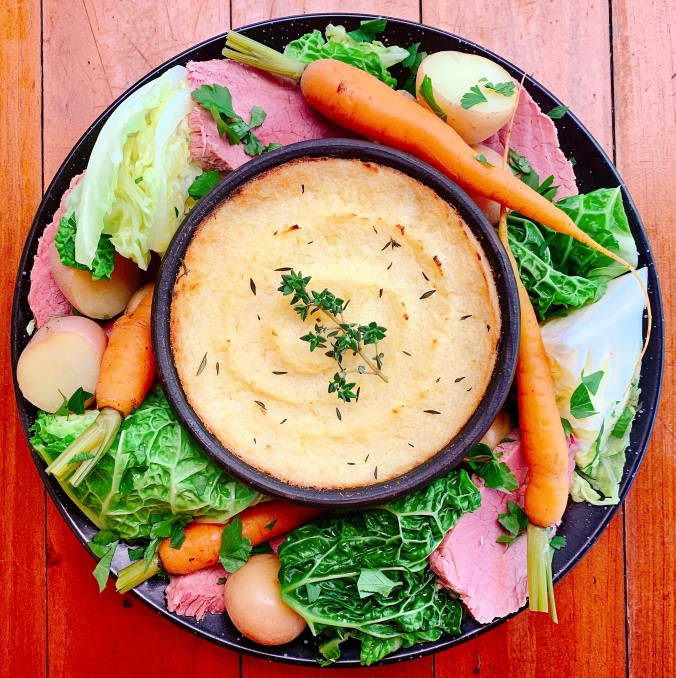 I don’t mind a cold beer now and again, but I tend to favour light ales, so I haven’t drunk much Guinness in my time. However, all of the people I have met who have ever been to Ireland inevitably tell me one thing within 5 minutes of meeting me: “the Guinness outside of Ireland is NOT THE SAME”. This statement is so frequent that I no longer doubt its veracity, but alas, I have never been to Ireland, so I am yet to try “real” Guinness. The legendary reason that it can never taste the same outside of Ireland is apparently that original Guinness was brewed using water from the River Liffey, which must have a statistically significant increase in magical properties as compared to other river water. Nevertheless, I’m sure that the Guinness available here has a passing resemblance to the real deal, and I actually find the taste more appealing as a meat marinade than a drink, so I was keen to try this dish. I began this week googling the difference between cottage pie and shepherds pie, which has always been somewhat of a mystery to me. As far as I can tell, they both have a meat and vegetable stew topped with baked mashed potato, but where shepherds pie is made with lamb (of course!), cottage pie is made with beef. Deciding on a cottage pie, I marinated chunks of chuck steak in the Guinness, and also included onions, carrots, peas, celery, garlic and thyme in the filling. I opted for chunks of steak over beef mince, because as every Aussie knows, a chunky steak pie is far superior to a mince meat pie… Possibly because it contains far fewer hooves? The filling was combined with a thick gravy made with Guinness, some beef stock and flour. Apparently the best potatoes to use for mashed potato are starchy varieties, which achieve light fluffy mash, as opposed to waxy varieties which are more likely to be lumpy and pasty. There’s really nothing like mashed potato with a crispy top covering a juicy meat filling, it’s always been a favourite of mine. Corned beef and cabbage is a famous Irish combination, often served in the USA on St. Patrick’s Day. Corned beef was a favourite of mine growing up, being a salt-cured cut of beef that takes its name from the “corns” (an Old English term for small particles) of salt traditionally used in its production. As you might imagine, the idea to preserve beef, and any other meat, in salt, likely arose millennia ago and in many different regions. The oldest recorded mention of it in Ireland comes from a poem called Aislinge Meic Con Glinne (The Vision of MacConglinne) which described the dish as a tool a king used to purge himself of the demon of gluttony. I regret to inform you that after eating corned beef this week, my gluttony demons are still well and truly ensconced within me – perhaps more is needed…? The modern popularity of corned beef and its link to Ireland can be traced back to its increased production from 1600s to 1800s to satisfy the demand for export to England, where it was consumed by civilians as well as supplying the many naval and military operations of both the motherland and its colonies. The ever increasing English demand for Irish corned beef is thought to have greatly contributed to the Great Potato Famine, as Irish citizens could rarely afford to buy or eat the corned beef themselves, and much of the farmable land of the country was taken over by beef production, leaving little room for other edible crops, except the humble and space-saving potato. This increased the dependency on the populace on potatoes for food, and contributed to the devastating impact that the potato blight wrought on the country. The modern popularity of corned beef, and association with the Irish, is therefore likely because of its old association with expense and luxury by the Irish, who ate it at every opportunity after immigrating to lands where it was cheap and plentiful, such as the USA. It never reached the same status of popularity in Ireland itself post-famine, but I join the spirit of my immigrant forefathers in their delighted consumption of the dish that they had been producing, but never eating, for years in heady defiance of the British. The array of vegetables accompanying the corned beef most traditionally includes cabbage, one of the cheapest vegetables, as well as carrots and, of course, potatoes.