India is far too diverse to be fairly divided into just two geographical parts, and I have a secret desire to one day cook around over 20 regions of this country to properly explore a greater portion of the wealth of culinary knowledge it has to offer. Alas, for now, I must divide the north and south, and happily there are tangible trends in their eating habits that separate the two. The people of the north, living in a drier, colder climate, with more pasture and less access to the sea, tend to eat more wheat than rice as their staple carbohydrate, more meat and less seafood than the south, with thicker, richer curries, and a greater amount of dairy products, while the south prefers watery curries and eats more coconut, vegetarian dishes and pulses. In the north, sourness is imparted upon foods commonly with amchoor (a dry mango powder) and pre-mixed dry spice powders are used to flavour food, while the south prefers tamarind and to roast and grind their spices fresh for each meal. The north also has stronger historic influences from neighbouring Pakistan and the Middle East that has been imparted upon the regional cuisine. If you are still confused, the best way to think about the division of Indian cuisine is that most restaurants in English-speaking countries serve primarily North Indian dishes, so most of what you would typically think of as “Indian cuisine” likely comes from the north, while the south is relatively under-represented. I have always thought of Indian food as a shining example of what can be achieved with ingenuity and appropriate use of spices. So much of the cooking involves turning cheap ingredients into taste sensations, which I think is why it’s become so internationally popular. It’s easy to make lobster and caviar taste amazing, it’s more challenging to work miracles with lentils and spinach (at least, in my opinion).

For this meal I made three typical North Indian appetisers, the first being tandoori chicken. The name comes from a “tandoor”, which is a cylindrical clay oven in which the chicken pieces are typically roasted after being marinated in a mixture of yoghurt, lemon juice and tandoori masala, which contains spices such as cayenne pepper, chilli powder, cumin, ground coriander, garam masala, ginger and turmeric. In modern times, the red colour of the cayenne pepper and chilli powder is often enhanced by the addition of red food colouring to create the deep hue associated with the dish. The tandoor oven is also commonly substituted for a regular oven or barbecue by home cooks. The earliest evidence of people roasting marinated chicken in clay ovens can be traced as far back as 3000 BC in the northwest of India. The dish was then associated with Punjab region, encompassing northern India and Pakistan, subsequently exploding into national and international popularity in the mid 1900s after being publicised by Punjabi chefs of the region and subsequently being advertised by the Los Angeles Times as a fresh new recipe for the American populace to try. Samosas are Indias most famous version of the “pastry-enclosing-filling” concept that I’m increasingly noticing is common the world over. The dough is usually formed with plain wheat flour, oil and water, unleavened and rolled thin, and the filling is only limited by the cook’s imagination, although typically involves a base of mashed potato with cooked vegetables such as onions, peas and lentils, mixed together with Indian spices. The samosas can be shaped into forms like triangles, semi-circles or cones, depending on the region, and are usually deep-fried, or alternatively baked for the more health-conscious among us. Although predominantly associated with Indian cuisine in the west, the samosa concept is thought to have originated in the Middle East, where it is now not as popular, and then spread, mostly via merchants, over the years to Africa, Southeast Asia, South Asia and Central Asia, estimated to have arrived in India in the 1200-1300s. Finally, we come to khandvi, perhaps the least famous member of my Indian appetiser plate. This dish originates from regions in the midwest of India, and is made first by forming a batter with yoghurt and gram (chickpea) flour, flavoured with ginger, salt, green chillies and turmeric. This batter is then slowly heated while continuously stirring until thick and smooth, then spread out thinly on a surface to cool and form thin sheets. The sheets are rolled up into tight spirals and seasoned, for instance with tempered black mustard seeds and curry leaves, as well as fresh grated coconut and coriander leaves. I served my three appetisers with a raita, made with yoghurt, mint, cumin, sugar, salt and chilli, and pronounced the dish an excellent literal and figurative starter to North Indian week! 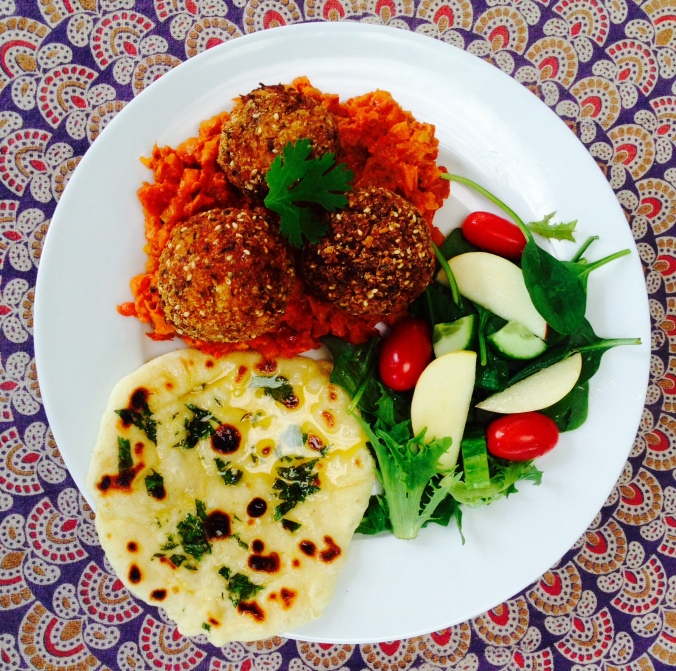 A dear friend of mine grew up in a family with a Sri Lankan chef who specialised in varieties of Indian food, and this meal was always a favourite in their house. She has since perfected the recipe, and generously bequeathed it to me. The first time she made it for me, it was a revolutionary experience. I always loved Indian food, but had only ever had the creamy, rich curries from Westernised restaurants in Australia, which is purportedly not exactly “the real deal”. This, on the other hand, was a subtle, sweet and aromatic balance of fresh flavours and textures, unlike anything I had ever tried. The sauce (which could be eaten by itself with a spoon, it’s that tasty), has a base of finely chopped caramelised onions and carrots, tomato, coconut milk, and many spices including cloves, nutmeg, cinnamon, cardamom, garam masala, ground coriander, chilli, garlic, onion, ginger, turmeric, cumin, star anise etc. The balance between all of these is hard to reach, but if you get it right, no single one is overpowering, and you just have a delicious symphony. The balls on top are home-made spiced ricotta, crumbed and deep fried. It’s surprisingly simple to make ricotta, all you do is boil milk, then add acid (lemon juice or white vinegar) slowly, stirring, until it’s curdled. Then you just sieve the curds through a cloth, and you have ricotta. I find a specially-bought pillowcase works well to strain it through, and not, as my boyfriend insists on telling dinner guests, his pillowcase that hasn’t been washed in a month. I’ve also tried muslin cloths and tea towels, but the cheese gets stuck to it much more and everything is harder to do. The home-made ricotta is much much nicer than store-bought, which always seems to be weirdly watery. The ricotta is spiced subtly with pistachio nuts, cardamom, pepper, chilli and a dozen other spices, and is a wonderful complement to the sauce. I served this at a dinner I had for my parents’ 27th wedding anniversary, with a salad of mixed greens, tomato and apple, as well as fresh home made naan bread. The naan was shockingly easy to make and successful. Really, I don’t think I’ve ever been so pleasantly surprised. I just made the dough, fried it quickly in a skillet and then brushed some ghee on top, and it looked and tasted better than in restaurants. It’s definitely worth the effort to make your own.

Chole bhature refers to a dish of spicy chickpeas (chole) and a fried puffy bread (bhature) that is thoroughly enjoyed in the Punjab region of northern India, particularly (though not exclusively) for breakfast. The concept of eating spicy food for breakfast makes perfect sense to me and I would happily devour this dish every morning, although I understand that for some the idea of eating anything spicier than cardboard is non-negotiable before lunch. Perhaps the idea of a lassi first thing in the morning would appeal more widely in the west, lassi being a sweet yoghurt drink sometimes flavoured with fruit that often accompanies a breakfast of chole bhature in India. I made my chole (also called chana masala) by first food-processing raw onion, garlic, tomatoes, green chilli and ginger into a paste, which I then fried along with whole roasted spices (cumin seeds, cinnamon, cloves, cardamom and peppercorns). Once the paste had cooked down and begun to caramelise, I added the whole cooked chickpeas, as well as turmeric, chilli powder, coriander seed powder, hing, amchur powder, and finally lots of garam masala with enough water to form a thick simmering stew. I made my bhature by forming a dough out of fine plain wheat flour (called maida in India), semolina, yoghurt, baking soda, salt, sugar, oil and water, leaving it to rest for a couple of hours, then separating it into small bowls that I rolled out into flat circles and deep fried. The leavening imparted by the baking soda is traditionally achieved by fermenting the yoghurt-infused dough overnight, although it seems that many take the easy way out nowadays. I had my reservations about whether or not these thin flat circles would puff up into the miraculous fried balloons promised by the recipes, but was delighted and surprised to see mine forming beautiful hollows in the centre of golden spheres – just the kind of cavity that screams to be filled, e.g. with paneer, as is common in India. Street stalls offer a variety of accompaniments for chole bhature, some of the most common being limes, red onion rings and green chillies, all for the shockingly low price of around 50 rupees. To give you some context, that is roughly one-seventh the price of a single Big Mac burger here in Australia, so maybe my dream of eating this meal for breakfast every day isn’t so far-fetched after all (at least financially speaking)…? 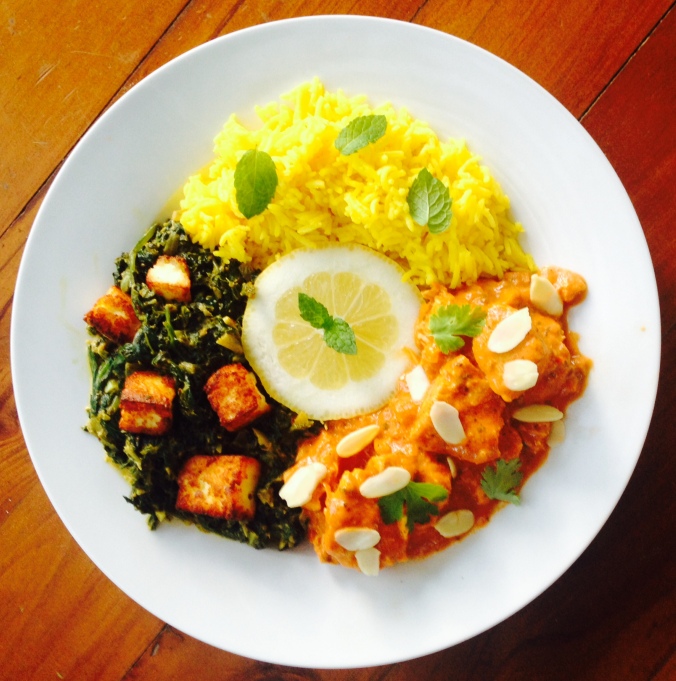 OK, OK, I know chicken tikka masala is probably not actually from India. Many (including the irrefutable QI) say that it actually originated in Glasgow in the 70s, after Indian spices were introduced to Great Britain. Wikipedia still says the origin is “disputed” however, and my boyfriend insisted that I cook it, so here we are. It’s usually tomato-based, with coconut cream and mild, sweet spices. Saag paneer basically has saag, which is a spinach-based curry, and paneer, which is cheese. I made the paneer, it’s pretty easy, you just follow the same steps as ricotta, but then at the end press it between two heavy objects so that it becomes a solid block. After that you just cut it up and lightly fry it. The cheese and spinach go really well together, especially with a squeeze of lemon on top.