Vietnamese cuisine is internationally renowned as one of the finest and healthiest in the world. Many elements contribute to this, including its reliance on fresh vegetables and herbs to create a clean and aromatic flavour, its liberal use of seafood umami flavours like fish sauce and shrimp paste to add a deeply satisfying salty undertone, the sweet and aromatic notes provided by lemongrass, ginger and sugar, the tart notes of vinegars and lime juice and the hints of spice from clever incorporation of fresh and preserved chillies. This concept of balance between flavours is deeply ingrained in Vietnamese cuisine, influenced by the Asian principle of the five fundamental tastes, all of which are represented by elements: sour (wood), bitter (fire), sweet (earth), spicy (metal) and salty (water). Each of these elements is also related to its own colour, sense, body organs and nutrient, rendering the prospect of creating the perfectly balanced and nutritious Vietnamese meal that captivates the five senses somewhat daunting, if I’m being honest. The concept of yin and yang, particularly as it relates to contrast, is also important in cooking, which can be seen in the frequent combinations of opposites: hot with cold, fresh with fried, crunchy with soft, wet with dry etc. The incredible flavour combinations achieved by this cuisine are even more impressive when you consider the centuries of war and conflict endured by the Vietnamese people, creating a society built upon instability and poverty, and necessitating ingenuity in the creation of dishes from cheap and available ingredients under less than ideal circumstances. This has also led to a world famous use of all (and I mean ALL) the various parts of the animal in the cuisine, as well as the consumption of any animal available, including rat, crocodile, snake, silk worms, porcupine and cobra. In addition to availability of local ingredients and ingenuity of native people, Vietnamese cuisine has also been shaped by a long history of international contact, beginning with China centuries ago, instigating the adoption of dumplings, wheat noodles and fried rice among others. France also left its mark on the country after its occupation beginning in the 1800s, introducing bread, onions, potatoes, lettuce, dairy products and coffee in the process. The neighbouring countries of South East Asia have also mutually influenced one anothers’ cuisine, including sharing the love of coconut milk and fish sauce, as well as exporting spices and curries, particularly influenced by India and Malaysia. Finally, Vietnam’s history of support for Communism has resulted in some unexpected influences from comrades in Eastern Europe, including stuffed cabbage soup and Russian salad. Vietnam has put its own stamp on all of these influences, creating a unique and, according to many, unparalleled cuisine. Indeed, I have long privately thought that Vietnamese is a strong contender for my favourite cuisine, although this cooking adventure has given me too much insight into all the world has to offer to possibly make such a choice anymore! 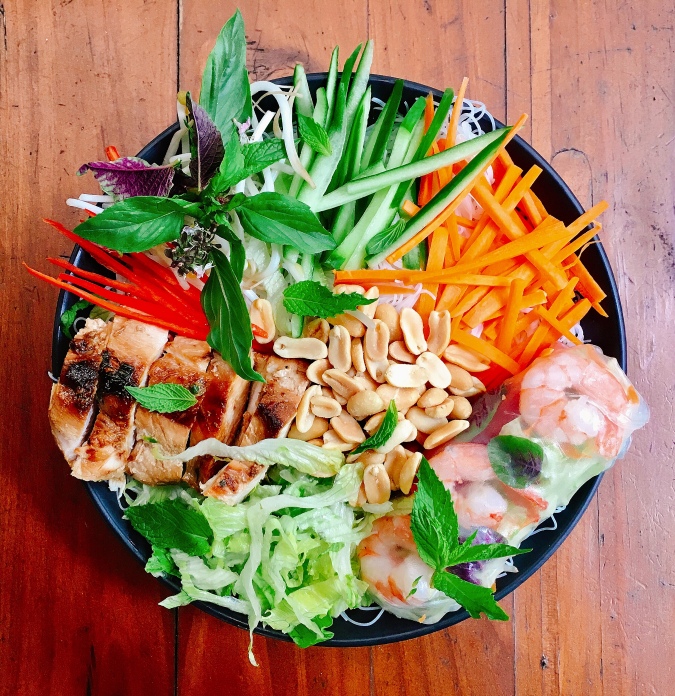 Whenever I’m away from Australia for more than a couple of weeks, visiting countries that have less authentic Asian cuisine options, such as almost all of Europe or South America, I inevitably develop an intense craving for Vietnamese food, specifically vermicelli salad. There’s just something about the aromatic clean cool flavours, the combination of fresh crunchy vegetables with soft comforting noodle that is ultimately satisfying. A local Vietnamese restaurant has therefore become one of my first stops on the way home from the airport after a lengthy international sojourn. The vermicelli salad consists of a bed of (usually cold) long thin rice vermicelli noodles, topped with fresh vegetables such as carrot, cucumber, lettuce and bean sprouts, mixed herbs (especially mint), peanuts, as well as some sort of protein source such as sugar cane prawn, grilled beef/pork/chicken or tofu. All of these ingredients are combined with a sweet and subtle dressing, for example combining rice vinegar, fish sauce, sugar, lime and garlic. Within my vermicelli salad I’ve added rice paper rolls (also called Vietnamese spring rolls, cold rolls, summer rolls or salad roll depending on where you are in the English speaking world), which are often filled with similar ingredients as are included in the salad, but rolled up within a thin film of rice paper and served with various dipping sauces, including hoisin, peanut or fish sauce based dips. These rolls are thought to have origins in the spring rolls of China, coming to Vietnam with Chinese immigrants, but which were subsequently adapted to suit local tastes, especially with the addition of handfuls of fresh herbs that typify so much of Vietnamese cuisine. 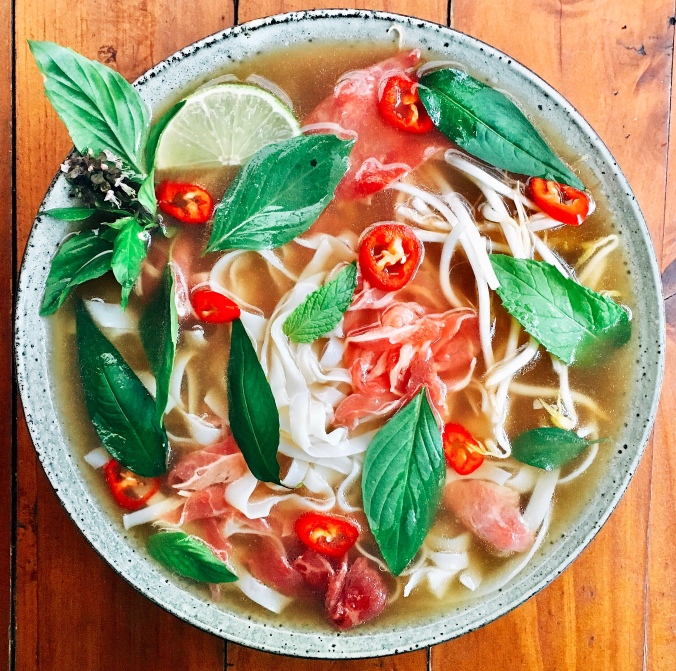 Like many English speakers, I have been guilty of mispronouncing “pho”, as “fo”, but which is purportedly pronounced more like “fur”. It describes a dish composed of a (usually) meat-based broth with rice noodles, with the most common varieties being beef (bo) or chicken (ga). Noodle soups have existed in Vietnam for centuries, but it is usually said that the modern version of pho emerged in the early 1900s in northern Vietnam, when meat (especially beef) became more prevalent in the country due to demand from the French colonists. This increase in beef consumption resulted in a concomitant increase in cheap beef bones, which were used predominantly by Chinese immigrants to make a classic stock that is reminiscent of dishes from southern China. There are two main theories about where the name itself stemmed from, with some arguing that it comes from the French phrase “pot-au-feu” meaning “pot on the fire”, but others declaring that it came from a Cantonese phrase meaning “cow meat noodles”. Pho originated from street stalls, and was sold from kitchens mounted on shouldered poles, remaining most popular at dawn and dusk when consumers buy a nourishing bowl to bookend their hard day of work from vendors who typically wear a distinctive felt hat (mu pho) to keep their heads warm. With a century of turbulence and war ahead of Vietnam, pho spread with refugees first from the north to the south of the country with the partition of Vietnam in the 1950s, and then later to the rest of the world following the Vietnam War and resultant refugees. Nowadays, the dish is internationally beloved, featuring at number 28 on a 2011 list of the World’s most delicious foods. To make my pho bo, I first cooked the stock by simmering beef soup bones and a piece of brisket with large pieces of charred ginger and onion, along with a muslin bag of roasted spices including star anise, cassia bark, cinnamon quills, cardamom, cloves and coriander seeds. The other flavours of the stock, added nearer to the end, were fish sauce and some sugar. After simmering for several hours with regular skimming to keep the broth clear, I strained the stock and served it with fresh flat rice noodles, some of the brisket from the stock, some thinly sliced rare beef rump, a squeeze of lime juice, bean sprouts, chillies, and lumping great handfuls of fresh herbs, including Thai basil and Vietnamese mint. I have long held an affection for pho – I even think that it’s a strong contender for the best meat-noodle soup in the world, mastering the balance between fresh and hearty flavours with subtle aromatics from the spices. Also, in the grand scheme of things, it’s a relatively healthy and nutritious meal, and, once you’ve found the herbs, it’s very easy to make, especially if you cook an excess of stock and freeze the leftovers for next time.

Banh mi (literally “wheat bread”) is a Vietnamese sandwich that is often cited as the very definition of fusion cuisine. It consists of a French-style single-serve baguette, composed of wheat flour but also with some rice flour to help the dough rise and become light and fluffy in the hot and humid environment, then filled with a mixture of meats such as cha lua (native Vietnamese pork sausage), other cuts of pork such as roast pork loin or belly and pâté, along with pickled carrot and daikon vegetable, cucumbers, mayonnaise, chillies and coriander. It’s world-renowned for its incredible balance and contrast of crusty bread, fatty meat and mayonnaise, crunchy and tart pickled vegetables and spicy chillies. The history of this sandwich is clearly linked to the French colonisation of Vietnam in the 1800s, when European crops and recipes were introduced to the country. One of the more troublesome of introduced crops was wheat, which struggled in the hot and humid climate, and therefore needed to be imported at great expense. Bread, therefore, was an expensive and scarce commodity in Vietnam at the time, and was usually reserved for the French colonists. However, following the outbreak of World War I, disarray of the French forces ensued as they scrambled to face the threat in Europe and closed some of the largest German import companies in Vietnam, with the result that bread and other exclusive products such as cold cuts and cheese flooded the Vietnamese market and became available to the locals. The adoption of bread by the local people increased and finally, after the defeat of the French in Vietnam in the 1950s, the people were free to combine native ingredients into the sandwich without French reproach. And so, the Banh mi was born! A couple known as Mr. and Mrs. Le are often credited as the first to sell the sandwiches, perfectly convenient for eating on the go, and their family still owns a restaurant in Vietnam today.

Lemongrass pork chop is a typical food sold by Vietnamese street vendors. It is prepared by first marinating pork chops in a mixture of finely ground lemongrass, fish sauce, chillies and sugar, for a couple of hours or preferably overnight. The pork chops are then grilled over charcoal until the inside is cooked and juicy and the outside is golden with the sugary marinade caramelising in sections, forming a dark and sticky film. The pork chop is most commonly served with steamed rice, which traditionally takes the form of “broken rice”, referring to pieces of the whole rice grain that break off in the harvesting process. Broken rice is a good example of a food product that arose out of poverty and necessity, as poor rice farmers would of course eat and sell this product at a cheaper price rather than throw it away, but which is now preferred in many culinary settings. Indeed, the rice also saves money on fuel by taking less time to cook, and forms a softer consistency than normal rice, often utilised for porridges and congees. Importantly, broken rice is said to better absorb the flavours of accompanying foods, which is ideal for the sweet and savoury juices that drip off a freshly-barbecued lemongrass pork chop. I found the broken rice delicious with a perfect texture, so I encourage you to try it if you have the opportunity. I served my pork chop and broken rice with some traditional accompaniments of sliced cucumber, chilli sauce and a fried egg.