Finland was part of the Swedish kingdom from the middle ages until periods of instability in the 18th century, ending with the Finnish war in 1809 when it became a Grand Duchy of Russia until 1917, when it became a republic. During its occupation by other countries, local Finnish people were relegated to peasants and slaves, with the upper class of the country speaking Swedish. The coexistence of these two languages is perhaps stranger than it would first appear, as Finnish belongs to an entirely different language group (Uralic) than virtually all other European and West-Asian languages, collectively termed Indo-European (including languages from Iran, India, Russia, Poland, Greece, Germanic languages (German, English, Swedish etc) and all of the Romance languages including Spanish and French). It could therefore be argued that Swedish is more related to languages in India than to Finnish! This may explain why the Finnish language, and perhaps other aspects of Finnish culture, survived so long in the face of centuries of external rule, as it was so different that it was difficult to merge the two, as happens in many other cases of colonisation. There were also a few dramatic famines over the years that decimated the working class population, all of which has shaped the Finnish cuisine to make use of cheap local ingredients, including those that can be farmed but also those that can be found in nature. Preservation methods, such as pickling, to survive the long unproductive winters were also prevalent, and can still be seen in modern Finnish culinary customs.  The infamous comments of two high-profile figures in Europe, Jacques Chirac and Silvio Berlusconi, that Finnish cuisine is one of the worst in the world, is therefore especially insensitive to the long history and struggles of the country. Also, as far as I can tell, it’s absolutely not true! Nowadays, Finland, like many Nordic countries, is an impressive performer in international metrics of income, welfare, gender equality, civil liberties, quality of life, education etc, including the most stable country in the world from 2011-2016. The current culinary scene is therefore respectful to the “agricultural/peasant/country food” traditions, while also heavily incorporating modern styles and ingredients. The cuisine of the country is often separated into influences from the west (close to Sweden and Catholicism) – more fish and meat typically cooked on a stove top – versus the east – (close to Karelia and Orthodox traditions) – more vegetable and mushroom dishes, typically cooked in the oven. Wholemeal grains and breads, such as rye and barley, berries, dairy products and root vegetables are popular all over the country, but no foodstuffs are more popular than cow’s milk and coffee, both of which are consumed at the highest rate per capita in Finland than anywhere else in the world. This is disturbing when you consider the statistic that 17% of Finns are lactose intolerant – switch to soy milk, Finns, it’s not worth it!

For my own Christmas celebrations this year I chose to cook a traditional spread from Finland, also known as a joulupöytä (yule table), featuring a joulukinkku (Christmas ham) as the centrepiece. This decision seemed apt, given that children the world over send letters to Santa Claus addressed to Finland, specifically to the northern part called Korvatunturi/Lapland, with Santa’s main post office there receiving over 30,000 letters a day during the holidays. Finns typically prepare their ham, a smoked cut, often a gammon (boneless leg), first by scoring the surface and coating it in a mustard sauce, which I made by boiling a combination of hot mustard powder, cream, sugar and some apple cider vinegar until thick. The ham is then coated in a mix of breadcrumbs and sugar, studded with cloves, and baked until golden and delicious. The tradition of eating ham at Christmas is not confined to Finland, with the custom thought to have originated amongst Germanic people in tribute to Freyr, goddess of pigs, harvest and fertility. The breadcrumb tradition lies in the custom of covering cuts of meat in pastry, often rye, before baking, in order to keep it flavoursome and succulent. I loved the combination of hot mustard and sweet crunchy breadcrumbs along with the ham, although I’m not sure if it will replace my deep affection for the sweet sticky glazes of my childhood. Finns go mad for casseroles during Christmas, and often a trifecta of casseroles, including potato casserole, rutabaga casserole and carrot casserole all grace the dinner table on Christmas Eve. As a friend of mine promised to bring her famous potato bake to my Christmas Eve pot luck, and rutabaga isn’t usually sold where I live in Brisbane, I opted to just make the carrot casserole, called porkkanalaatikko (literally “carrot box”). It’s made by combining grated (or mashed) carrot with cooked short grain rice, beaten eggs, salt, nutmeg, milk and butter, then topping it with breadcrumbs and baking until golden. I was pleasantly surprised by the carrot casserole – it sounds a little meagre compared to other lavish carnivorous Christmas dishes, but was actually delightfully sweet and savoury, with a fantastic texture.  The next side was rosolli, a salad made with chopped beetroot and other root vegetables such as potato and carrot, along with pickles, onion and apple for added flavour. I dressed mine with a mixture of whipped cream, vinegar and dill, although sour cream is sometimes used in place of pure cream. The name rosolli is thought to come from the Russian word for brine (rassol), perhaps referring to the brine of the pickles, beetroot or dressing. I also roasted some turnips, which is not strictly a regular Christmas side, but I’m sure they are eaten throughout the year in Finland. A sweet pea sauce, thickened with cream and flour, and which typically accompanies the Christmas ham, completed the spread. One of the most important non-culinary Christmas traditions in Finland is to partake in saunas, an activity that is hugely popular all year round, but especially in the holiday season. My Finnish Christmas was therefore inadvertently authentic, given that Christmas in Brisbane occurs during summer, where the temperature can get above 40 degrees celsius, and where it’s not unheard of for humidity to rise above 80%. Unfortunately for us, we don’t have the luxury of diving into the snow for relief after a Christmas in these conditions – lucky Finns!

Karjalanpiirakka, commonly known in English as Karelian pies, are pasties made with a thin rye crust encasing a savoury filling. “Karelian” refers to the territory of Karelia that used to lie between Finland and Russia, which gave rise to this dish during the 1600s. World War II saw the mass immigration of Karelian residents to Finland, and with them came much of their culture, including cuisine. In days of old, the fillings of karjalanpiirakka could include barley, potato or buckwheat, but in modern times usually consists of a rice porridge. I think this filling could use some rebranding, as I discovered that calling them “rice porridge pies” elicits much less excitement from dinner guests than labelling them “risotto pastries”. Lesson learned. I made my rice porridge by combining short-grained rice, milk, water, salt and butter on a low heat until thick and creamy. I then made the rye dough by combining rye flour, wholemeal wheat flour, butter, salt and water, and rolling out thin circles. I scooped the filling into the centre of each pastry and pinched them closed, making the traditional crimped wave patterns in the process, then brushed the whole thing with butter before baking until browned. If I am truthful, I don’t think I’m technically allowed to call the pastries I made karjalanpiirakka, because they have “Traditional Specialty Guaranteed” status in Europe, and so can only be produced by specific regions. Mine can formally be called “riispiirakka” (rice pasties), although I don’t think it has the same ring to it. The pastries are often eaten with munavoi, a paste made of finely chopped boiled eggs mixed with butter. I didn’t include the egg sauce as I didn’t think the karjalanpiirakka needed extra butter or eggs, they were already so rich and delicious! I’m endlessly amazed by the ingenuity of humanity to create such decadent meals out of simple cheap products.

In Finnish “lohi” means salmon and “keitto” means soup, so no prizes for guessing what this dish comprises. Lohikeitto is a classic example of the kind of fare you might find during the cold Finnish winters, when green vegetables were not traditionally available, and fish, dairy and stored root vegetables needed to be assembled in creative combinations until the return of fresh produce. I made my lohikeitto by first frying leeks and onion in lots of butter, then adding cubed potatoes and carrots, fish stock, bay leaf, allspice and cream. I simmered the mixture on a low heat until it had reduced and the wonderful flavours had diffused through the liquid, then added the chopped salmon fillets near the end of cooking, removing from the heat as soon as they had cooked through. I seasoned the soup with lots of salt and pepper, as well as lumping great handfuls of dill, which is, in my humble opinion, the ideal accompaniment to fish. One of the greatest revelations that I’ve garnered from my cooking adventure is how much I adore dairy-based seafood soups – they never inspired much interest in me previously, but now I jump at any opportunity to scoff the combination. Lohikeitto was no exception to the rule, and it can proudly join the ranks of outstanding seafood soups that the world has to offer. 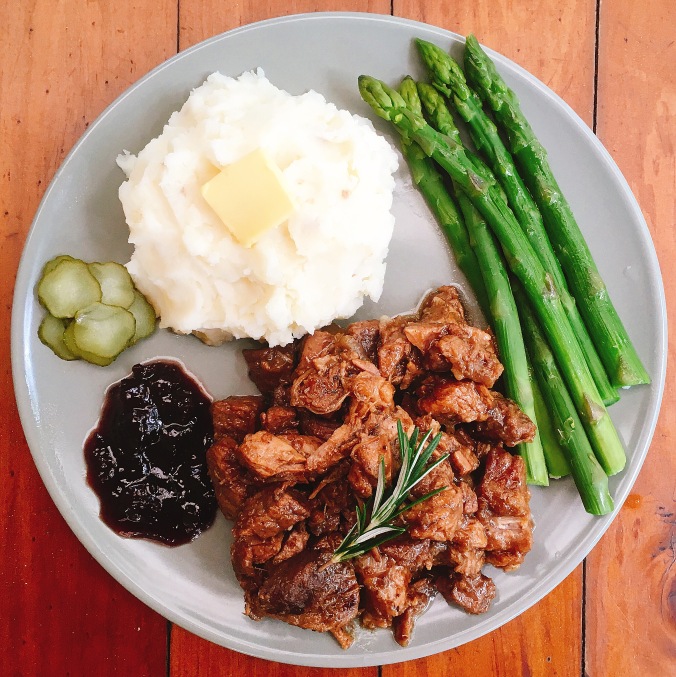 Karjalanpaisti is known in English as Karelian hot pot or Karelian stew and is a meat-based stew again arising from the Karelian region, regarded by some as the national dish of Finland. Karjalanpaisti is cooked by first browning meat (usually a combination of pork and beef) on a stovetop in a Dutch oven, possibly with some onion. Water and/or stock is then added to the meat, as well as some root vegetables, although the latter isn’t necessarily part of the recipe. The stew is then cooked on a low heat for hours in the oven until the meat is fall-apart tender and has soaked up the simple-yet-effective flavours of peppercorns, salt, allspice and bay leaf. As meat has only become frequently available to the average Finnish family in modern times, this dish was traditionally made for special occasions, especially during Easter celebrations. I am fully on board with the concept of oven-stews, having burned the bottom out of cooking pots more times than I care to admit (okay, it was only twice…). This meal was a surprising hit at a pre-Christmas get together I hosted, and was so easy to make that I fully intend to repeat it at a later date when I have meat and not much else in the fridge. I served my karjalanpaisti with the traditional accompaniments of mashed potato and lingonberry jam, as well as some steamed asparagus and pickles to add a little green to the plate. Having never experienced snow, I have a vague imagining of what it would be like to come into a warm house after long cold hours in the snowy wilderness and tuck into some hearty karjalanpaisti, although I suspect the reality would be even better.